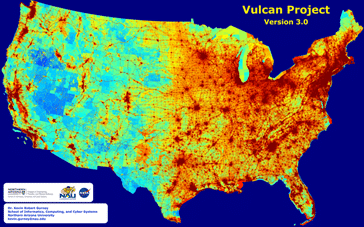 With intense wildfires in the western United States and frequent, intense hurricanes in the Gulf of Mexico, the nation is again affected by extreme weather-related events resulting from climate change. In response, cities, states and regions throughout the country are developing policies to reduce their emissions of greenhouse gases, chiefly carbon dioxide (CO2). Even though many state and local governments are committed to these goals, however, the emissions data they have to work with is often too general and too expensive to provide a useful baseline and target the most effective policy.

Gurney, who specializes in atmospheric science, ecology and public policy, has spent several years developing a standardized system, as part of the Vulcan Project, that quantifies and visualizes greenhouse gases emitted throughout the entire country down to individual power plants, neighborhoods and roadways, identifying problem areas and enabling better decisions about where to cut emissions most effectively. Leading up to the nationwide study, Gurney produced emissions maps of several different large cities, including the Los Angeles megacity, Indianapolis, the Washington, D.C./Baltimore metropolitan area and Salt Lake City, Utah.

Funded by NASA, Gurney developed the high-resolution emissions map as an effective tool for scientific and policy applications. His goal is to provide policymakers throughout the nation with a means to strategically address problem areas instead of taking an inefficient and costly approach.

“We’re providing U.S. policymakers at national, state and local scales with a scalpel instead of a hammer,” he said. “Policies that might be relevant to California are possibly less relevant for Chicago or New York. They need to have information that reflects their unique conditions but follows a rigorous, standardized scientific approach. In this way, they can have confidence in the numbers which, in turn, will stimulate smart investment in reducing emissions.”

One of the strengths of Gurney’s approach is validation by atmospheric monitoring of CO2 from ground-based and satellite instruments.

Through characterization of CO2 emissions across the U.S. landscape from coast to coast, Gurney points out that the system offers every U.S. city an inventory on emissions.

“By extracting all cities in the U.S. from our data product, we can offer every city a consistent and comprehensive assessment of their emissions. Like the U.S. weather forecasting system, this problem is best solved with a single systemic approach and shared with city stakeholders so they can do what they know how to do better than anyone—reduce emissions in ways that meet their individual need,” Gurney said.

Data from the Vulcan mapping project is available on the Oak Ridge National Laboratory Data Archive. Additional imagery is available on the Vulcan website. This research was made possible through support from the National Aeronautics and Space Administration grant NNX14AJ20G and the NASA Carbon Monitoring System program, Understanding User Needs for Carbon Information project (subcontract 1491755).

Gurney joined NAU in 2018, where he is continuing the research he started in roles at other universities. He has been involved with the United Nations Climate Change Framework Convention and the Kyoto Protocol for 25 years and is a lead author for the Intergovernmental Panel on Climate Change (IPCC). In addition to his interests in carbon cycle science and policy, he has worked on stratospheric ozone depletion, radionuclide dose assessment, energy systems and climate-economic modeling.