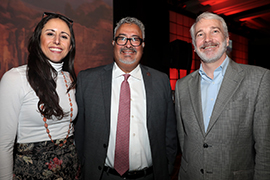 Arizona Rep. Lorenzo Sierra, D-Avondale, was being treated in the intensive care unit of Johns Hopkins Hospital in Baltimore Monday for “complications related to COVID-19,” one day after being hospitalized with the virus in Washington.

Sierra’s transfer to Hopkins comes the same day that President Donald Trump was released from Walter Reed Military Medical Center, where he spent three days after testing positive for COVID-19 late Thursday. Before his release Monday, Trump tweeted that he was “feeling really good. Don’t be afraid of Covid. Don’t let it dominate your life.”

But Arizona Democrats said the recent cases should be taken as a reminder that people need to be aware that COVID-19 is still a threat.

“Rhonda and I urge everyone to wear masks when in public, practice physical distancing, and frequent handwashing and sanitizing to remain as safe as possible,” Sierra tweeted Sept. 29, after the couple came down with symptoms but before his hospitalization.

He tweeted at the time that, “We are both in good spirits and continue to isolate while waiting 14 days until we can return home.”

The statement from Arizona House Democrats said Cagle and Sierra had tested negative for the virus before traveling to Washington but, “despite taking extensive precautions at all times, they somehow became infected.”

The statement did not say which Washington hospital Sierra checked into Sunday, nor did it indicate why he was transferred to Hopkins on Monday. Officials at Hopkins declined to comment.

Sierra’s diagnosis sparked an outpouring of support and well-wishes.

“We’re going to keep democracy warm until you get home, Zo. We love you. Heal quick,” said state Rep. Jennifer Longdon, D-Phoenix, in a tweet.

In Washington, Senate leaders on Monday announced a two-week pause in floor activity after three senators said last week that they had tested positive for the coronavirus. All three had been at a Sept. 26 White House ceremony to present Supreme Court nominee Amy Coney Barrett.

In Phoenix, a spokesman for the House Republican Caucus said legislators “are and will continue to follow all CDC (Centers for Disease Control and Prevention) and local/state guidance” on how to operate in the face of COVID-19. He said more details will be announced as the next legislative session nears in January, but Longdon said she does not expect it will be business as usual.

“My expectations are that we will use the very best guidance from the CDC and Arizona public health officials to ensure we are doing the business of the people of Arizona with as much transparency and interaction as is safe for the public,” she said.

The statement from House Democrats said Sierra’s family had asked for “privacy during this difficult time.” But Cagle did take to Twitter to ask for prayers.

“Please pray for my husband. He is a fighter and we are praying for his quick and full recovery,” Cagle tweeted.