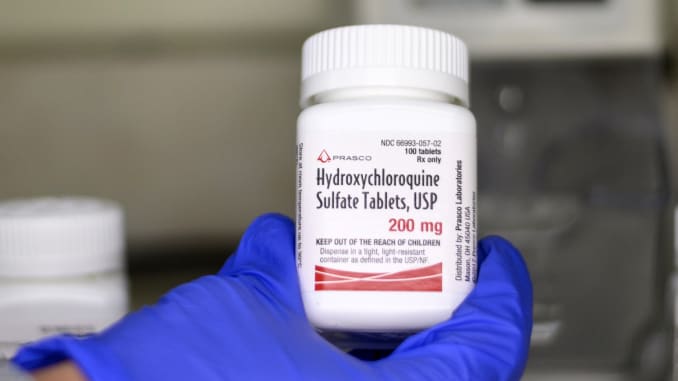 President Donald Trump repeatedly has touted hydroxychloroquine as a possible “game changer” in the fight against COVID-19, and in May he told reporters he has taken it as a precaution. But his physician did not prescribe the antimalaria drug after the president tested positive on Thursday, instead giving him an antibody cocktail, according to White House officials.

Late Thursday, Trump tweeted that he and first lady Melania Trump had tested positive for COVID-19. On Friday, press secretary Kayleigh McEnany tweeted an update from Trump’s physician, describing the president as “fatigued but in good spirits” and listed his course of treatment. Hydroxychloroquine was not listed.

The antibody cocktail he took, known as REGN-COV2, has shown “reduced viral load and the time to alleviate symptoms in non-hospitalized patients” as well as “positive trends in reducing medical visits,” its developer, Regeneron Pharmaceuticals Inc., said Tuesday.

Trump has long supported hydroxychloroquine to treat COVID-19. In May, he told reporters he was on a two-week cycle of hydroxychloroquine, and he continued to promote the drug for months after, despite warnings from the Food and Drug Administration that it could be fatal to certain patients. Warnings against use of the drug are echoed by the American Medical Association, the country’s largest association of doctors and medical students, saying “decisions to use these medications off-label must be made with extreme caution and careful monitoring.”

The Association of American Physicians and Surgeons, a Tucson group founded in 1943 that “fights to preserve medical freedom,” has pushed back against federal and state regulations of the use of hydroxychloroquine, going as far as filing a lawsuit in June against the FDA, requesting the release of hydroxychloroquine supplies from the Strategic National Stockpile.

In a news release Friday, the group said the president and first lady’s positive tests show that “the need for early treatment to prevent serious illness and death from COVID-19 is extremely urgent.”

Dr. Jane Orient, executive director of the association, said the situation regarding hydroxychloroquine is less about the drug itself and more about the restrictions being placed on physicians.

“This the first time I have ever seen anything like this,” Orient told Cronkite News. “I think it’s just highly politicized, and there are people in positions of authority who have conflicts of interest, maybe different ideological views, but are using their authority to cause decisions that are affecting millions of patients.”

One outspoken politician who supports the use of hydroxychloroquine is U.S. Rep. Andy Biggs, R-Gilbert, who has been a big proponent of the “right to try,” which contends that patients should have the option to try potentially life-saving medication that has not been fully approved by the FDA.

Biggs, who last month urged Arizonans to “unmask,” has posted a series of tweets supporting the use of hydroxychloroquine and claimed in the past that the pandemic – which has killed more than 206,000 Americans in less than seven months – has been blown out of proportion, the Arizona Republic reported.

After Trump’s announcement of his positive test, Biggs published a video in which he encouraged the president and the first lady to take a “hydroxychloroquine, zinc and Z-Pack regimen” to treat COVID-19. Biggs, a former attorney, is not a doctor.

According to the White House’s announcement, Trump is taking vitamins and minerals, including zinc, in addition to the antibody cocktail.

Biggs’ support of “right to try” goes back to 2018, when he pushed for the passage of the Trickett Wendler, Frank Mongiello, Jordan McLinn and Matthew Bellina Right to Try Act. The act, signed into law by Trump in May 2018, allows terminally ill patients who have exhausted all other options to try drugs that have passed the first stage of FDA clinical trials but have not yet received FDA approval.

Biggs now is using the same rhetoric to push back against regulations limiting the use of hydroxychloroquine in COVID-19 patients.

One such regulation comes from Arizona Gov. Doug Ducey, who in April signed an executive order that “strictly prohibited” the use of hydroxychloroquine as a preventative measure until its effectiveness in prevention can be shown in peer-reviewed evidence.

Ducey’s order does allow for hydroxychloroquine as a treatment once a COVID-19 diagnosis is proven, but in limited 14-day supplies.

The Arizona chapter of the Association of American Physicians and Surgeons took issue with Ducey’s order, specifically with the ban on hydroxychloroquine as a preventative method.

In a letter, the association said “time is of the essence in this pandemic” and “Arizona does not need to wait for controlled trials in order to start saving lives.”

The president’s vocal support for hydroxychloroquine use has had serious consequences in Arizona. In March, a couple in metro Phoenix ingested chloroquine phosphate, which can treat malaria but also is used to clean aquariums. They believed it was the drug Trump promoted to combat COVID-19, but the husband died and his wife was hospitalized.

In an email to The Arizona Republic last month, Arizona Department of Health Services spokesman Steve Elliott wrote that the executive order remains in effect, and “we continue to review the current medical literature and will update if appropriate.”