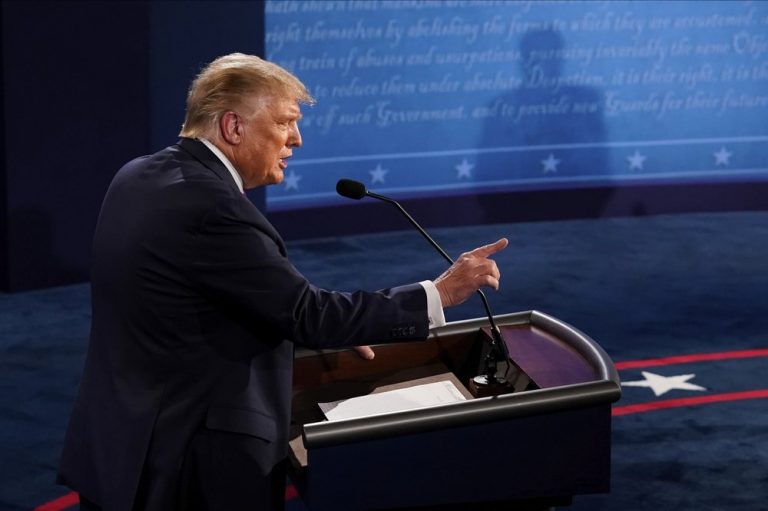 President Donald Trump on Wednesday defended his debate comments on the right-wing extremists known as the Proud Boys, but reaction from officials in Arizona ranged from dismissal to dismay.

The furor began Tuesday night during the nationally televised debate with Democratic presidential nominee Joe Biden, when Trump was asked to condemn violent groups like the Proud Boys. He said they should “stand back and stand by,”

That set off alarm bells for Rep. Ruben Gallego, D-Phoenix, a Marine veteran who said others in the audience immediately noticed Trump’s choice of words.

“We Marines know what it means to be told to ‘stand by.’ It means get ready to fight,” Gallego tweeted. “Trump’s words tonight are a dangerous call to get ready for action. We need to heal this country, not divide it more.”

For Rep. Raul Grijalva, D-Tucson, Trump’s debate performance was just the next chapter in the president’s ongoing flirtation with the alt-right.

“He has never passed up an opportunity to push their narratives and demonstrate his support,” Grijalva said in an emailed statement, “Last night’s comments were just that, a signal of support and a dangerous call for them to be on standby if he loses the election.”

Arizona Republicans were mostly silent on the furor, and those who did comment on the debate tended to focus on the president’s call for “law and order” and not his specific language.

“President Trump will uphold the rule of law in our nation, negotiate better and fairer trade deals that put American workers first, and demonstrate that he is the man to continue to lead our Great American Comeback,” said a statement from Arizona Republican Party Chairwoman Kelli Ward.

Trump on Wednesday also used the law-and-order argument, and tried to claim there is a larger problem with violent left-wing groups.

“I don’t know who Proud Boys are,” Trump told reporters. “But whoever they are, they have to stand down. Let law enforcement do their work.”

But critics said Trump’s debate comments “really emboldened” the Proud Boys, who had adopted “stand by” as a logo for sale on their merchandise within hours of the president’s statement.

The Proud Boys were formed in 2016 and are known for white nationalism, misogynistic and anti-Muslim rhetoric, according to the Southern Poverty Law Center, which designated it a “general hate” group for its growing list of ideologies against different minorities. The group has been known to use violence as its main selling point to court new members, the center said.

“Trump’s recent statement – is something that really emboldened them,” Miller said.

The center said the Proud Boys are one of 21 active hate groups it is tracking in Arizona. And Keisha McKinnor, assistant regional director for the Anti-Defamation League of Arizona, said the group has “a presence” in the Phoenix and Tucson areas.

McKinnor believes hate groups have become more emboldened in recent years, saying she has seen an increase in anti-Semitic propaganda. Just last month, posters saying “Hitler was right” appeared on Arizona State University’s Tempe campus, she said. While no group has been associated with the incident, McKinnor cites it as another example of hate spreading in the state.

“When you do not provide condemnation for hate groups it really signals them to be ready,” she said.

Enrique Tarrio, current chairman of the Proud Boys, pushed back against the “white supremacist” label, but left no doubt how he felt about Trump’s performance.

“Him telling the ProudBoys to stand back and standby is what we have ALWAYS done,” Tarrio tweeted Tuesday, who added that he was “extremely proud of my president’s performance tonight.”

Grijalva, noting that Trump refused to condemn their actions of white supremacists after deadly protests in Charlottesville, Virginia, in 2017, said he was not surprised by his latest reticence.

“It’s just the latest demonstration that he is shamefully unfit to be the President of the United States and incapable of being a president for all of us,” Grijalva’s statement said. “His actions represent a grave threat to our democracy.”