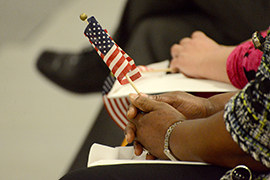 A federal judge late Tuesday blocked a steep increase in application fees set to take effect Friday for people seeking U.S. citizenship, an increase that advocates feared would have locked many immigrants out.

U.S. District Judge Jeffrey White said that U.S. Citizenship and Immigration Services did not follow proper procedures when it ordered the higher fees. He also said the two men running USCIS and its parent agency, the Department of Homeland Security, did not have the authority to approve the increases because both men serve in acting roles.

Arizona advocates welcomed the court’s action, saying the increases would have almost doubled the cost of naturalization, from $650 to as much as $1,170, putting the cost of citizenship out of reach for many.

“These community members are landscapers and they clean houses, so they’re not in the high-income bracket,” said Petra Falcon, executive director of Promise Arizona. “Applying for citizenship is a luxury.”

A USCIS spokesperson said in an email that the agency is “reviewing the ruling on the fee rule and has no further comment at this time.”

While the ruling helps migrants in the short term, it could have long-term implications for the agency, which draws almost all of its budget from fees and currently faces a $1 billion shortfall.

“But of course there’s a lot of concerns about USCIS’s budgetary problems,” Pierce said.

Migration Policy Institute said fees were last raised in 2016, when the cost for a non-military immigrant to apply for citizenship was set at $650.

The new fees that were set to take effect Friday would have raised citizenship application fees to between $1,150 and $1,170. Asylum seekers would have had to pay a $50 fee previously covered by other application charges and the cost of suspending a deportation would have grown more than five times.

When the new fees were proposed on July 31, USCIS said the increases were in line with previous years when the agency set “a weighted average increase of 20% to help recover its operational costs.” The July 31 statement said revenue from the fee increases would go toward “increased costs to adjudicate immigration benefit requests, detect and deter immigration fraud, and thoroughly vet applicants.”

Ira Mehlman, the media director for the Federation for American Immigration Reform, disagreed with the court’s ruling that blocked the increase, saying USCIS should be able to charge what it needs to keep operating.

“In order to be able to keep the agency afloat … they needed to have the people who are directly using the services pay for the cost of maintaining this organization,” Mehlman said.

But the agency’s budget deficit has only become an issue in recent years, Pierce said, as business has declined and it has invested more in fraud detection and enforcement.

“Applications to the agency, and that’s fees to the agency, have significantly decreased over the last two years,” Pierce said. “In addition to that while their (USCIS’) income was decreasing, their costs were increasing.”

Pierce said the agency has been pushing austerity measures to cut costs or raise prices on customers – moves that Falcon said targets poor immigrants and keeps them from becoming citizens. It would also increase the burden on nonprofit organizations like hers that may provide financial help to those seeking citizenship.

“But that means we’re going to have to step up and raise money to support the people who normally would be afforded a waiver” of application fees, Falcon said.

In August, USCIS made drastic cuts to its services to avoid furloughs for nearly 70% of its workforce.

“There’s a good chance that this could be the final straw that pushes USCIS over the edge and make them go through the furlough that they have threatened twice before this year,” Pierce said of the court ruling.

There’s another element of the ruling that could affect the agency, said Ilya Shapiro, an expert at the Cato Institute who wrote a brief opposing the fee increases: Its questioning of the authority of acting USCIS Director Ken Cuccinelli and acting Homeland Security Secretary Chad Wolf.

A Government Accountability Office report in August found that Wolf and Cuccinelli are serving improperly because their appointments violated the laws governing federal nominations.

Shapiro said that makes it “not a fees case, it’s a government structure case.” Because their appointments were not made as required by law, their “exercise of authority under the relevant immigration laws was improper as well.”

That could have larger consequences for Trump administration immigration policy, Pierce said.

“If other judges agree with this judge, then that could mean we have a domino effect of a series of decisions that unravel a lot of the Trump administration immigration policies,” she said. “It could be the start of a really significant and interesting trend.”

The ruling came one day before the Senate Homeland Security Committee voted 6-3 to send Wolf’s nomination to the full Senate. The party-line vote came more than a year after Trump nominated Wolf.

Shapiro said Wolf will likely win confirmation, which could make White’s ruling moot. At least until the next election.

“Chad Wolf and maybe even Ken Cuccinelli will be approved by the Senate and then they can start the process of reimposing the fees again,” Shapiro said. “Ultimately this will be decided by whether the Trump administration is reelected or not.”