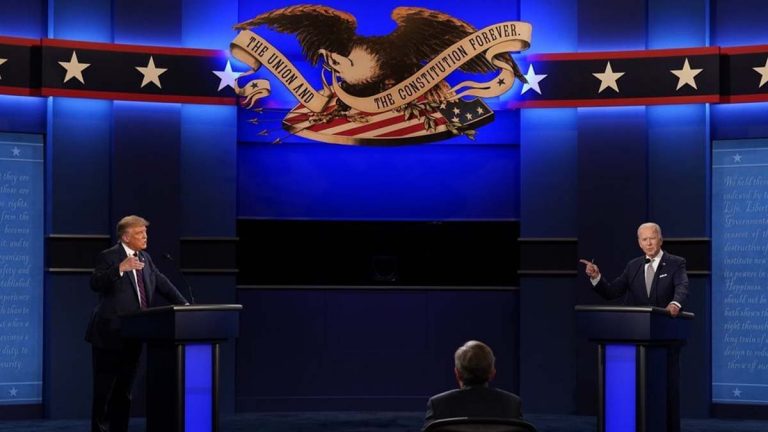 Point: As Bad As It Can Get

Well, at least it wasn’t boring, because we needed a little more rancor and yelling to round out 2020. Perhaps a cable news segment of Boomers interrupting one another to the extent that no clear message can be heard, extended to 96 minutes, is the debate we deserve.

Tuesday night’s presidential debate had more than its fair share of fireworks, but as the smoke cleared in the auditorium, it was hard to discern a winner. Former vice president Joe Biden gave composed answers in the initial part of the debate, which focused on the Supreme Court and COVID response, while the president overdid his attack-dog posture, at times coming off as petulant and reluctant to answer the questions as presented.

However, when the topic turned to race relations and the breakdown of law and order that Americans are witnessing in their cities, Trump’s belligerence stopped working against him. Biden may have claimed to be the Democratic Party (“le Democrats c’est moi?”) but he knows perfectly well that he can barely say the words “law and order” without further depressing turnout among already-unenthusiastic progressive voters.

Biden’s denial of the existence of Antifa and his rosy picture of radical Critical Race Theory trainings will fail to win over independents concerned about the rising power of the “woke” left, while his description of his economic plans as “Wall Street” approved, and his blatant reversal on endorsing the Green New Deal will further alienate Bernie voters.

The unfair media narrative arising out of an exchange about far-right violence — which Trump condemned but only with a follow-up accurately blaming the radical left for the spasms of urban violence in cities from Portland to Chicago — will likely end up on voters’ cutting room floor, alongside desperate attacks about the president’s taxes and anonymously sourced remarks.

None of this is really a surprise. Fairly or not, COVID response remains an Achilles’ heel for the president, with just a third of independents approving his performance. And Biden’s greatest challenge is simultaneously separating himself from the rioters, while avoiding pushing away his party’s left flank, already on the fence about him.

Ultimately, whoever wins this election, the Democratic Party will have to resolve its internal tensions. The energy on the left has split itself into dueling camps: the “woke” neoliberals, who focus primarily on culture war issues, and the Rust Belt Bernie bros, who see the cultural fights as a distraction from the underlying class divide. The latter camp may defect in still-larger numbers to a Trumpist Republican Party that focuses on an anti-globalist message about manufacturing and trade. But Biden himself pleases neither.

Trumpism is in a far more popular position on the right than Bidenism is on the left, which is at best, as the former VP has said himself, “transitional.”

But at the end of the day, this debate was a missed opportunity for Trump. If the polls are to be believed, he’s trailing the former vice president. A draw leaves the current status quo, and with the campaign-from-the-basement strategy Biden has been pursuing thus far, Trump may run out of opportunities to unload on his opponent directly. A missed one may hurt more this cycle than it would have in past elections.

More than for Trump, though, this debate was a missed opportunity for voters who likely would have liked to hear about competing visions on actual policy challenges like education, which has surged to the front of many families’ priority lists due to battles over re-opening, as well as perennial issues like health care reform and immigration.

It’s become a cliche to curse the calendar year, but many Americans are really struggling with the virus’ effects, along with the economic fallout from lockdowns, and millions are watching the urban unrest from coast to coast with fear and dismay. If voters were looking for real answers to the challenges of 2020, they didn’t hear them Tuesday night.

A little WWE-style quip here or there makes the political world (and the viral clips) go round, but 90-plus minutes trying to listen to three men talking over one another does not make for a debate that helps resolve independent minds. In fact, in one post-debate focus group, the debate persuaded some undecided voters not to vote at all.

One thing is for certain, future debates need a stronger, ruder moderator to force these two belligerent septuagenarians into an actually informative exchange. According to a recent poll, a majority of Americans would tune in to watch popular podcaster Joe Rogan moderate the first podcast debate, an idea with considerable merit. It surely couldn’t get any worse.

Inez Stepman is a senior policy analyst at Independent Women’s Voice. She wrote this for InsideSources.com.

Counterpoint: There Were Two Candidates on Stage, but Only One Adult

It took all of 10 seconds for the first of three presidential debates between Joe Biden and President Trump to devolve into yet another Trump temper tantrum.

Time and again, moderator Chris Wallace begged, pleaded and at times even yelled at the president to stop interrupting his own questions — to say nothing of Biden’s answers — but his protestations, much like the rest of his performance, were largely ineffective. Instead, the leader of the Free World adopted the affectations of a maladjusted 7-year-old: insult, complain and lie. Wallace, who raised six children into adulthood, failed to mature a seventh.

And then there was Biden. It’s hard to imagine the kind of debate prep one does when preparing to confront a serial liar and lifelong cheat on national television, but after watching him on stage for 90 minutes, the former vice president steered clear of the mud fight Trump so desperately wanted to have. Sure, Biden at times interjected when his record was falsely besmirched, or when Trump pulled entire budget estimates and nonsensical statistics out of thin air, but Biden managed to maintain an air of calm, frequently ignoring the dumpster fire to his right and affixing his gaze directly into the camera, addressing voters face to face. He was, to put it mildly, the only adult on stage Tuesday night.

While Trump lied on stage about his response to the pandemic that has killed more than 200,000 Americans, Biden reminded everyone that he released a plan in early March on how to address the coronavirus outbreak, on the same day that Trump assured the country that the coronavirus was “going to go away … within two months.”

While Trump refused to apologize for insulting war heroes and Gold Star families and for calling American troops who died on the battlefield “losers” and “suckers,” Biden reminded viewers that his own son served with honor, and that enlisted men and women will never have to question the reverence that he, as commander in chief, will hold for them.

While Trump lied to viewers about his income taxes — he insisted he paid “millions” in income tax in 2016 and 2017, when in fact reporting from the New York Times show he paid just $750 each year, far less than the average firefighter — the Biden campaign released  the full returns for their entire presidential ticket.

But there was perhaps no greater contrast between the two candidates on stage than when it came to actual policy. On the economy, on climate change and renewable energy, on public health and safety, on policing — Joe Biden showed voters that his administration will be ready on Day 1 to address the shortcomings that his predecessor created or exacerbated.

Biden’s record during the recovery from the Great Recession, his focus on job creation by investing in clean energy, his plan to reallocate police resources to focus on de-escalation instead of incitement, all put into sharp relief Donald Trump’s complete abdication of his office.

After nearly four years of running for re-election — remember, Trump filed campaign paperwork on Inauguration Day 2017 — the president failed to outline a single concrete policy proposal he would pursue in a second term. Even a badgering Chris Wallace couldn’t coax an answer out of Trump on health care, rightly pointing out that “getting rid of the Affordable Care Act” does not constitute a health care plan.

Focus groups  of undecided voters used words like “arrogant,” “un-American,” and, incredibly, “crackhead,” to describe Trump’s performance, while Biden was “more professional,” “coherent” and a “leader.” Polls asking viewers who won the debate were even more lopsided.

There were small pockets of the country that did enjoy Trump’s performance, though — mostly white supremacists, who once again watched as the president declined to condemn their violent, racist behavior. Even as his own  intelligence officials warn that far-right extremists pose a national security threat, Trump name-dropped one of the more visible and violent groups, telling them to “stand back and stand by.” Members of that group were celebrating the shout-out online, even as the Trump campaign feebly tried to do damage control.

Absolutely nobody who watched Tuesday’s proceedings would describe the debate as “clear.” But in its aftermath, voters could not have a better picture of what’s at stake this November.

Adam Peck is the senior media coordinator at the Center for American Progress. He wrote this for InsideSources.com.

PrevPreviousOpinion: Americans This November Will Show Their Support for Marijuana Legalization
NextDebate commission says it will make changes to formatNext