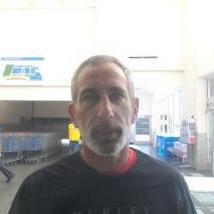 Suspect Brian Aurelio is still being sought regarding the September 23rd incident in Congress – see prior media release below for details. Yavapai Silent Witness is offering up to a $650 cash reward for any information leading to the arrest of the suspect. Simply call 1800-932-3232 or submit a tip online.

Charges pending so far include Kidnapping, Endangerment and Resisting Arrest. There are additional charges for Aurelio in unrelated cases from the Congress area which include 3 counts of Burglary, Possession of Stolen Property, and 2 counts of Vehicle Theft. As previously indicated, the suspect has several warrants out of a least 3 Arizona counties for a variety of charges.

Aurelio may be armed – do not approach. Any information, even if seemingly insignificant, could help take this dangerous felon off the street.

Aurelio is about 5’ 06” tall, 175 pounds, Gray hair and Green eyes. He shows an address in Peoria. It is very evident he will have a substantial injury to his left arm from contact with broken glass.

Issued September 24, 2020 –   On September 23, 2020, around 8 AM, deputies went to a home in the 27000 block of E. Grandview, Congress, regarding a suspect vehicle spotted that was involved in an ongoing trespassing/vehicle theft case. As deputies approached the home, they saw 47-year-old Brian Aurelio look at them then run. Brian exited the home by smashing through a closed windowpane and apparently injuring himself evident by a pool of blood nearby. The deputies saw Brian jump a fence and enter a travel trailer parked on the property. As deputies neared the trailer, they heard a women yell, “He’s got a gun.” Brian told the deputies he was not going to jail and intended to kill himself. As deputies attempted to converse with Brian, he came out of the trailer holding the woman around the neck as a hostage and indicating he was armed. Brian was able to access a quad vehicle parked nearby and took off with the woman as his passenger.

An extensive search for Brian continued throughout the day, along with air support from a DPS Ranger crew. Although Brian was not located, the woman he left with was found by Wickenburg Police Officers just before 3:30PM on Highway 93 at Scenic Loop Road. She told officers she had convinced Brian to let her go and was unharmed otherwise. She apparently has an on and off history with Brian and was very upset at how he treated her during the escape.

A short time later, the quad was located about a mile in from Highway 93 on Scenic Loop Road. It had been abandoned and Brian was not found.

Brian is being sought on multiple charges including several counts of Burglary, Aggravated Assault and Vehicle Theft. Brian also has warrants for various charges out of Coconino, Pinal and Maricopa counties.

Brian is about 5’ 06” tall, 175 pounds, Gray hair and Green eyes. He shows an address in Peoria. It is very evident he will have a substantial injury to his left arm from contact with broken glass.  Anyone with information on his whereabouts is urged to call the Yavapai County Sheriff’s Office at 928-771-3260 or contact Yavapai Silent Witness at 1800-932-3232. A tip to Silent Witness resulting in the arrest of this suspect will be eligible for a cash reward. You may also send a tip online at www.yavapaisw.com.