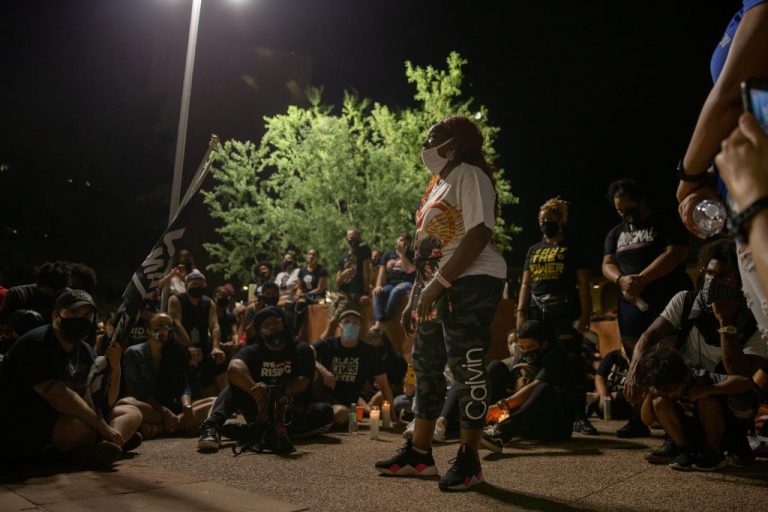 Violence has marred some protests across the country after Kentucky prosecutors declined to charge officers in the shooting death of Breonna Taylor, but a peaceful gathering Thursday night in Phoenix City Hall Plaza struck a more somber note.

More than a hundred people gathered for a candlelight vigil to honor Black Americans killed by police violence – including Dion Johnson, 28, a Phoenix man killed during a traffic stop May 25 – and to protest the lack of charges filed against the officers responsible for his death and Taylor’s.

On Monday, Maricopa County Attorney Allister Adel declined to pursue criminal charges against George Cervantes, the Arizona Department of Public Safety trooper who shot and killed Johnson in his vehicle near a freeway on-ramp. Cervantes told investigators Johnson tried to grab his gun during a struggle.

On Wednesday, a Louisville, Kentucky, grand jury declined to indict the three officers who fired multiple rounds into Taylor’s apartment while executing a no-knock search warrant March 13. A former officer was charged with wanton endangerment.

At Thursday’s vigil, a famous quote of civil rights activist Fannie Lou Hamer – “I am sick and tired of being sick and tired” – seemed to resonate in many speeches given by attendees.

The evening began calm and quiet, as a muted crowd of activists, families and friends gathered outside City Hall with candles, signs and T-shirts that listed the names of victims of police brutality.

But the silence quickly crescendoed into demands for change and declarations of hope as leaders of the W.E. Rising Project, which organized the vigil, addressed the crowd.

“The reason behind these candles was nonexistent months ago,” said Jacob Raiford, a member of the project. “The reason why we’re gathering here was not needed months ago. We continue to exist in a society where certain members of this society are stratified because of their intrinsic differences.”

Raiford mentioned Johnson and shouted, “Say his name!” and the crowd responded with loud, passionate chants.

Among the crowd of supporters was Johnson’s mother, Erma Johnson. As she spoke, the crowd circled around her and knelt.

“I don’t know how you are living, if you’re happy, if you’re sad, if you’re miserable, what you’re doing, but you made my life a living hell,” she said, referring to Cervantes.

“I heard something when I was listening to the audio that you told my son, you told him, ‘Get your M-F out of the car or I’ll shred your insides.’ So that being said, I hope you go to prison. I hope you go for the rest of your life.”

The W.E. Rising Project describes itself as a movement that “is creating systemic change through peaceful protests and legislature,” according to its Facebook page.

“We’ve been out here, you know, with these other organizations and hosting other events to bring attention and awareness to the Black Lives Matter movement and fighting for Black and brown lives,” project member Jazlyn Geiger said. “So that’s why we’re out here for tonight, due to the injustice.”

Throughout the evening, attendees spoke, many whose stories mirrored Dion Johhnson’s.

Cuspard said she attended the vigil to do what she couldn’t do in 2001 when her uncle was gunned down in downtown Phoenix.

“People are dying for no reason. People are not getting their right to trial,” she said. “The police think that they’re the judge, jury and executioner and they’re taking people’s lives … for what purpose?”

Raiford said the prominent issues no longer are those concerning policy or politics, they are about humanity.

“We stand up every time,” he told the group. “Look among you, different races, creeds, orientations, age bracket, political orientation. People are fed up. It’s not about bipartisanship anymore. It’s about humanity.”

After the speakers were finished, organizers noted that separate groups planned a march in downtown Phoenix, but their vigil was over.