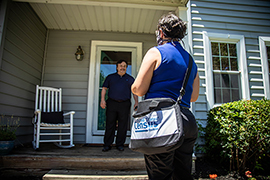 A see-saw legal battle over the 2020 Census continued Friday, with the government pushing to end the count in just five days while local governments, including two Arizona tribes, hoped to extend it to Oct. 31.

It comes as state officials are scrambling to improve Arizona’s census response rate, which was ninth-lowest in the country Friday at 94.7%. Response rates for the Navajo and Gila River Indian Community, which are part of the suit to extend the census, are just a fraction of the state rate.

At stake are millions in federal aid for local governments and representation in Congress, all of which are based on an accurate decennial census.

Lewis and other critics won a brief victory late Thursday when U.S. District Judge Lucy H. Koh ordered the Census Bureau to stick to its previous Oct. 31 ending date, ruling that plaintiffs would “suffer irreparable harm” if the Census count were to cease enumeration on Sept. 30.

Her ruling was challenged almost immediately by the Commerce Department, the parent agency of the Census, which filed an appeal with the 9th U.S. Circuit Court of Appeals and asked Koh to stay her order while the appeal was pending.

Koh denied that request which means – for now, at least – the Census cannot wind down operations.

In a statement Friday night, the bureau confirmed that it “will comply with the Court’s order and continue our Nonresponse Follow Up Operation” and that field staff have been instructed to continue current operations until further notice.

McPaul called Koh’s ruling “a significant step forward in the fight for an accurate Census to ensure hard-to-count populations.”

Ensuring an accurate census count is difficult in a typical year in tribal areas, where enumerators are often faced with rural terrain, limited broadband access, cultural and language barriers. Those challenges have only been heightened by COVID-19, which forced a delay in the census schedule and hit some parts of Indian Country particularly hard.

The pandemic has also scrambled the Census Bureau timeline for completing its count and delivering a report to the president by Dec. 31 as required by law.

After being forced to halt operations for eight weeks this spring, the bureau came out with a revised schedule. It pushed the original ending date from July 31 to Oct. 31 and set a new date to deliver its report to the president in April – a move that would require congressional approval.

But on Aug. 3, the bureau released a “replan” that moved the end date up to Sept. 30 and restored the Dec. 31 deadline to report to the president.

In her ruling, however, Koh cited several instances when Census officials said it would be “ludicrous” to accelerate the schedule in hopes of meeting the Dec. 31 deadline. She noted a May 26 presentation by Timothy Olson, the bureau’s associate director for field operations, in which he said, “We have passed the point where we could even meet the current legislative requirement of December 31. We can’t do that anymore … we’ve passed that for quite a while now.”

Thomas Wolf, senior counsel and Spitzer Fellow for the Brennan Center for Justice, hailed Koh’s ruling as “a significant victory in the ongoing fight to save the 2020 Census from a critical undercount of our country’s communities of color.”

“The court’s order will give that time back to the Bureau by blocking the Trump administration’s illegal decision to shut down the Census early,” Wolf said in a statement.

For their part, Arizona officials said they intend to keep working for a full count, whatever the end date may ultimately be.

“The state will continue its outreach efforts to promote self-response in every community through the conclusion of the Census and continue supporting the Bureau as needed in their field operations,” said Alec Thomson, director of the Arizona Complete Count Committee, in an email.

Lewis said he was not surprised to see the government appeal Koh’s ruling Friday, but wished it spent less time fighting local communities and focused its energy instead on achieving a more accurate Census count. He said the issue has become “political, when it shouldn’t be.”

“It’s unfortunate that the government has decided to appeal last night’s decision, which would, of course, ensure a complete and accurate account,” Lewis said. “It would be more beneficial to the federal government to expend its resources into Indian Country and other hard-to-count areas.”