Road to Saudi ties with Israel being paved, cautiously 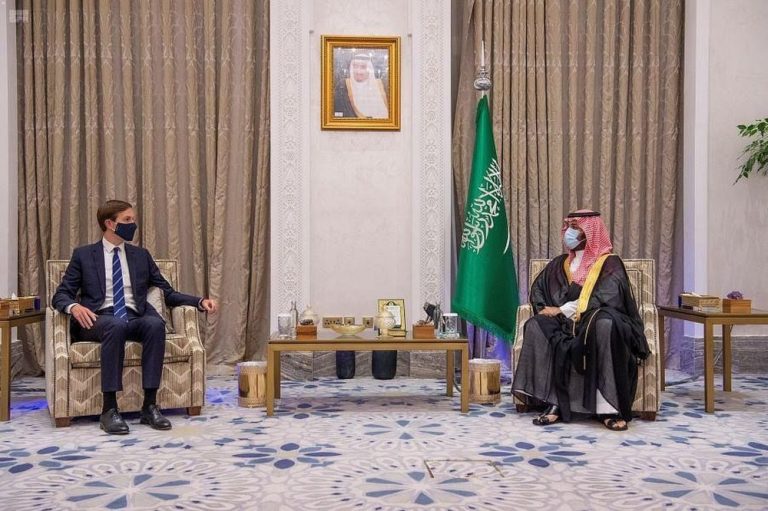 Saudi Arabia, the most powerful Arab nation and home to Islam’s holiest sites, has made its official position on the region’s longest-running conflict clear: Full ties between the kingdom and Israel can only happen when peace is reached with the Palestinians.

Yet state-backed Saudi media and clerics are signaling change is already underway with Israel — something that can only happen under the directives of the country’s powerful heir, Crown Prince Mohammed bin Salman.

The divergent messages on the possibility of Saudi ties with Israel reflect what analysts and insiders say is a schism between how the 35-year-old prince and his 84-year-old father, King Salman, view national interests.

“It’s no secret there’s a generational conflict,” said New York-based Rabbi Marc Schneier, who serves as an advisor to Bahrain’s king and has held talks in Saudi Arabia and other Gulf countries to promote stronger ties with Jews and Israel.

Gulf capitals have been increasingly looking to Israel as an ally to defend against common rival Iran amid quiet concerns about the direction of U.S. foreign policy and the uncertainty around the upcoming presidential election. But it’s not only countering Iran that’s brought Israel and Arab states closer in recent years.

The rabbi said the former Saudi ambassador to the U.S., Prince Khalid bin Salman, told him that the top priority of his brother, the crown prince, is reforming the Saudi economy.

“He said these exact words: ‘We will not be able to succeed without Israel.’ So for the Saudis, it’s not a question of ‘if,’ it’s a question of ‘when.’ And there’s no doubt that they will establish relations with Israel,” Schneier said.

Prominent Saudi royal, Prince Turki al-Faisal, insists “any talk of a rift between the king and the crown prince is mere speculation.”

“We’ve seen none of that,” said the prince, who served for years as head of intelligence and briefly as ambassador to the U.S.

Analysts and observers say Saudi Arabia is unlikely to formalize ties with Israel as long as King Salman wields power. While the king has handed off day-to-day control of Saudi affairs to his son, he has stepped in on occasion to intervene and even push back with statements in support of the Palestinians.

In a phone call with President Donald Trump on Sept. 6, King Salman repeated his commitment to the Arab Peace Initiative, according to the state-run Saudi Press Agency. The initiative offers Israel normal ties with Arab states in return for Palestinian statehood on territory Israel captured in 1967 — a deal that starkly contradicts the Trump administration’s Middle East peace plan.

Still, the crown prince has bucked tradition with an unprecedented assertiveness. Prince Mohammed is also eager to reset ties with the U.S. in the aftermath of the killing of Saudi critic Jamal Khashoggi in 2018.

When the White House announced last month the United Arab Emirates and Israel agreed to establish full diplomatic ties — a move matched by Bahrain weeks later — Saudi Arabia refrained from criticizing the deal or hosting summits condemning the decision, despite Palestinian requests to do so.

The Palestinians have slammed the agreements as a “betrayal of Jerusalem, Al-Aqsa Mosque and the Palestinian cause,” but government-controlled Saudi media hailed them as historic and good for regional peace.

The kingdom also approved the use of Saudi airspace for Israeli flights to the UAE, a decision announced the day after Jared Kushner, Trump’s son-in-law and senior adviser, met with Prince Mohammed in Riyadh. Kushner has been pushing Arab states to normalize ties with Israel.

Prince Mohammed was quoted in The Atlantic during his most recent visit to the U.S. in April 2018 saying Israel is a big economy and “there are a lot of interests we share with Israel.” He said Palestinians and Israelis have the right to their own land, before adding there has to be a peace agreement to assure stability and to have normal relations.

His comments were interpreted as support for the eventual establishment of full ties between the kingdom and Israel, which would annihilate what’s left of the Arab consensus that recognition of Israel can only come after the establishment of a Palestinian state.

Most telling, however, was the Sept. 11 announcement that the tiny-island nation of Bahrain was establishing ties with Israel. Analysts say the move could not have happened without Saudi approval.

It strongly suggested Saudi Arabia is open to the idea of formal ties with Israel, said Hussein Ibish, a senior resident scholar at the Arab Gulf States Institute in Washington.

“It tells me they are willing to look at this themselves in the future, possibly,” he said. “There is a sense that this might be a very good move for Saudi Arabia, but they don’t want it to be an expression of Saudi weakness. They want to make sure it’s an expression of or a contributor to Saudi strength.”

Prince Turki says Arab states should demand a high price for normalizing ties with Israel. He said Israel remains “the stumbling block in all of these efforts.”

“My view is that if you take a sounding now of Saudi positions on Palestine … you see more than 90% of the population as supporting the official position of Saudi Arabia that there must be a Palestinian state with east Jerusalem as its capital,” Prince Turki told The Associated Press.

Raghida Dergham, a longtime Arab columnist and co-chair with Prince Turki of the Beirut Institute Summit in Abu Dhabi, said younger generations in the Middle East want normality rather than a confiscation of ambitions and dreams.

“They want solutions not a perpetuation of rejection,” said Dergham, whose Beirut Institute e-policy circles have tackled questions about the future of the region and its youth.

When the UAE-Israel deal was announced in August, the top trending hashtag on Twitter in Saudi Arabia was against normalization with Israel. Still, public criticism in Saudi Arabia, the UAE and Bahrain has largely been muted, in part because these governments suppress free speech.

“It is very hard to get accurate data, even when polling people,” said Yasmine Farouk, a visiting scholar at the Carnegie Endowment for International Peace.

Farouk said public opinion on Israel in Saudi Arabia is diverse and complex, with opinions varying among different age groups and among liberals and conservatives. She said there is an effort to prepare the Saudi public for change and to shape public debate around Israel.

As Saudi Arabia prepares to mark its 90th National Day on Wednesday, clerics across the country were directed to deliver sermons about the importance of obeying the ruler to preserve unity and peace.

Earlier this month, the imam of the Grand Mosque in Mecca, Sheikh Abdul Rahman al-Sudais, delivered another state-backed sermon on the importance of dialogue in international relations and kindness to non-Muslims, specifically mentioning Jews.

He concluded by saying the Palestinian cause must not be forgotten, but his words caused a stir on social media, with many seeing the remarks as further evidence of the groundwork being laid for Saudi-Israeli ties.

The English-language Saudi daily, Arab News, which has been featuring op-eds by rabbis, changed its social media banner on Twitter this past Friday to say “Shana Tova,” the Jewish New Year greeting.