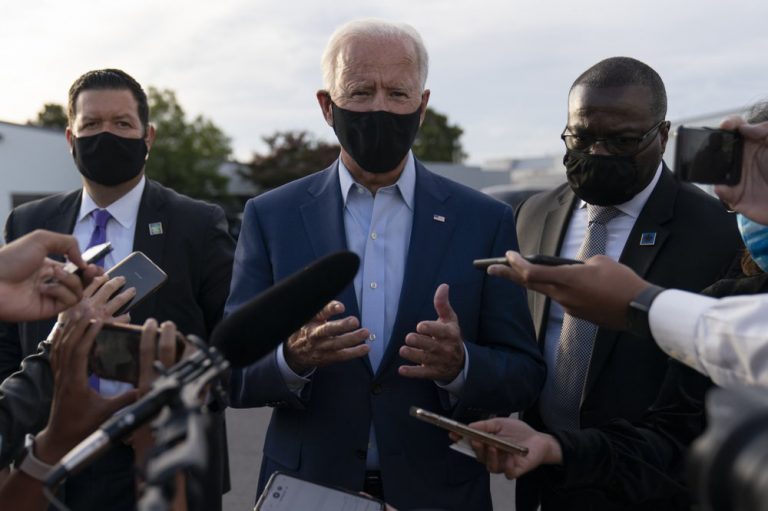 Since Joe Biden ran away with the Democratic presidential nomination in March, leading progressives have accepted him — sometimes grudgingly — as their party’s leader. But, in the final weeks of the campaign, the Supreme Court vacancy is threatening to inflame old divides.

Some activists on the left are pressing Biden to endorse expanding the number of high court justices should he win the White House and Democrats take control of the Senate. But Biden, who ran a relatively centrist primary campaign, hasn’t embraced those calls, worried they may intensify the nation’s partisan split.

There’s little indication that large swaths of progressives will abandon Biden or back third-party candidates, moves that wounded Democrat Hillary Clinton’s 2016 bid. But activists insist they will keep pressure on Biden to pursue dramatic reforms to the Supreme Court if Republicans move forward with a plan to quickly approve President Donald Trump’s pick to replace the late Justice Ruth Bader Ginsburg.

“The majority of Berniecrats will most likely vote for Vice President Joe Biden,” said Nina Turner, a former Ohio state senator and top adviser to progressive Sen. Bernie Sanders’ 2016 and 2020 presidential campaigns. “That doesn’t mean that they are not going to raise hell all the way.”

“Biden should make it clear that he will fight back by expanding the court if he wins,” said Turner, who is founding a firm to advance progressive causes, Amare Public Affairs.

The Constitution doesn’t mandate the number of Supreme Court justices, which has changed over time. In 1937, President Franklin D. Roosevelt promoted legislation to “pack the court” by expanding its number of justices, an effort that stalled once the justices began to rule in his favor on policies tied to the New Deal.

Since then, the makeup of the court hasn’t been a prominent issue in national politics. That began to change after Justice Brett Kavanaugh’s contentious 2018 nomination fight. Calls to add justices grew much louder this week in response to the GOP’s rush to fill Ginsburg’s seat before the election, which would leave the court with six conservatives and three liberals.

“The politics of this are moving very, very fast,” said Aaron Belkin, director of Take Back the Court, which advocates for increasing the number of justices. “And under a Biden administration, when the court has the administration handcuffed on Day One, I think the politics are going to be changing even more quickly.”

That puts Biden in a tough spot. As someone who spent 36 years in the Senate, he built a career revering Washington’s institutions. During the 2020 primary, he pointedly declined to join rivals such as Massachusetts Sen. Elizabeth Warren or California Sen. Kamala Harris, who is now his running mate, in being open to court expansion.

During his first extended comments Sunday about Ginsburg’s death, Biden appealed to the few remaining moderate Senate Republicans to buck their party’s leadership, rather than to progressives looking for him to support a larger court.

Since then, Biden has largely sought to avoid the issue as he’s campaigned in battleground states, preferring instead to focus on Trump’s handling of the coronavirus pandemic and high unemployment. He ducked a question about changes to the court during an interview with a Wisconsin television station, saying a response would “shift all the focus.”

Biden has also said Democrats should concentrate on making it clear for voters why the GOP push to quickly fill Ginsburg’s seat is a “gigantic mistake and abuse of power.”

“Voting for Joe Biden is not about whether you agree with him. It’s a vote to let our democracy live another day,” Alexandria Ocasio-Cortez said on Instagram last week.

The New York congresswoman spent months expressing skepticism toward Biden but also was co-leader of a task force on climate change that top Biden supporters and advisers formed with their counterparts from Sanders’ unsuccessful presidential campaign to try to better reach consensus on top issues. Those groups made policy recommendations that helped shape the Democratic Party platform, which was adopted at its national convention last month and was meant to avoid the ideological clashes that Clinton endured four years ago.

Sanders, who opposes Supreme Court expansion, and Warren, who has suggested she’d be willing to support it, have similarly used Ginsburg’s death as a rallying cry for Biden.

“Democracy as we know it is in danger,” Warren said at a virtual event with Virginia leaders, calling Republican court efforts “the last gasp of a desperate party that is overrepresented in the hall of power.”

During a speech Thursday, Sanders warned that Trump is openly suggesting that he’ll brand as illegitimate any election he loses. He cited “the danger that this country faces from a president who is a pathological liar, who has strong authoritarian tendencies, who neither understands nor respects our Constitution and who is prepared to undermine American democracy in order to stay in power.”

The voting results may be disputed and trigger a legal fight, Sanders said, noting that Trump “is attempting to push through a Supreme Court justice who may very well cast a vote in a case that will determine the outcome of this election.”

Rather than mentioning expanding the Supreme Court, Sanders said the way to counter that is to have the largest voter turnout in U.S. history.

Just getting Biden elected might not be enough for everyone, though. Adam Green, co-founder of the Progressive Change Campaign Committee, called the coming Senate nomination fight Biden’s chance to offer a “first big show of force as leader of the Democratic Party.”

“He can quickly unify Democrats in saying no confirmation until after inauguration,” Green said. “And promising to expand the court if Republicans do an end run around democracy.”