‘That was my identity’: COVID-19 pandemic costing stadium workers their jobs 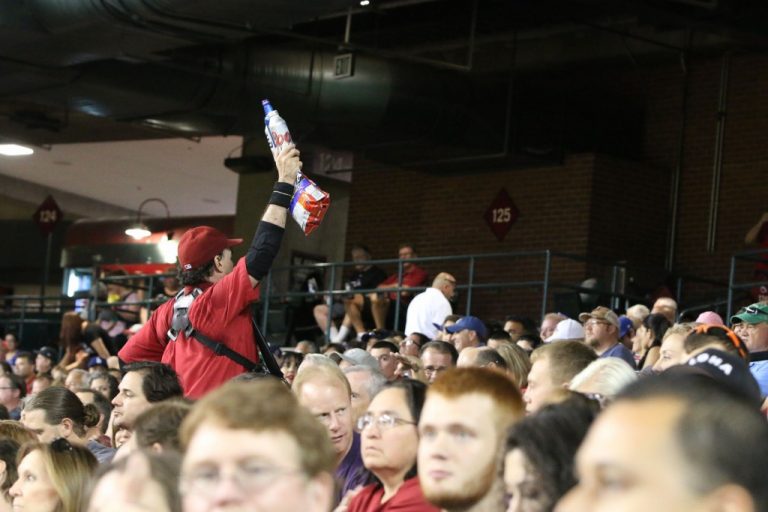 In March, teams in the NBA and NHL were closing in on the playoffs, spring training was in full swing in Arizona’s Cactus League and Florida’s Grapefruit League. March Madness was about to unfold as college basketball teams competed in conference tournaments.

Then it all came to a stunning, abrupt halt because of the COVID-19 pandemic. When Utah Jazz center Rudy Gobert tested positive for the virus, it set off a cascade through every level of sports.

The NBA and NHL halted their seasons. The bats fell silent and players packed their bags at spring training venues. Conference basketball tournaments were canceled – during halftime of a game in the case of the Big East Conference event.

But athletes were not the only ones sidelined by the pandemic. Those who work at sports venues and depend on the games to make a living felt the sting, too. Maybe more.

When the world went into quarantine last spring, millions of people suddenly found themselves in unemployment lines. In April, the U.S. unemployment rate rose to 14.7%, the highest it’s been since the Great Depression.

Most of those who work at stadiums were in those lines.

Tom Hardison, 38, who had worked nine years for the Levy food-service company primarily as a bartender and in catering at Talking Stick Resort Arena in Phoenix, was drawn to his profession through his love for sports. And then they were gone, along with his job.

“It was very special to me. The emotional benefit far outweighed the financial benefit,” Hardison said. “There is no unemployment perk that allows you to fill that void.”

Hardison especially loved working Phoenix Suns games. His enthusiasm for the Suns, more than a passion for mixing adult beverages, led him to his job.

“I was a huge Suns fan,” Hardison said. “I really wanted to be involved with the Suns in any way.”

But he also takes pride in his work.

“Being a bartender, people kind of think you’re a wizard because you can make a Vodka Cranberry,” Hardison said. “And that’s not the case – although I do make a good Vodka Cranberry.”

Zach Gibson, 22, worked at SAP Center in San Jose, Calif. as part of a unit called the Ice Team, which is responsible for keeping the ice clear during professional hockey games at the arena, which is home to the NHL’s San Jose Sharks and the AHL’s San Jose Barracuda.

“It never really felt much like a job, just because it was so fun,” Gibson said.

However, like so many others depending on sports to make a living, Gibson found himself wondering what would happen to his job.

“It was a little bit of an emotional roller coaster, because of how everything happened with the whole shutdown,” Gibson said. “It was kind of happening and no one really knew what was going on.”

Like Hardison and Gibson, most people who work in or around professional sports are currently unemployed or furloughed. Some have had better luck, for now.

“I’m on a part-time status as of right now, so I’m not unemployed,” Stennis said. “But as soon as this season ends, I will basically be unemployed again.”

For Stennis, the uncertainty is the worst part of the situation.

“I don’t know if I should move on from sports, or kind of just hold on and wait it out,” he said.

A former Navy firefighter and EMT, Stennis paid his dues to make his dream job a reality. Just a few years ago, he was working six part-time jobs at the same time to make ends meet.

That’s why he hopes his Diamondbacks job won’t go away forever.

“For this to happen, it’s kind of crushing,” Stennis said. “I kind of think I took it more personal or to heart than anybody else, because I put so much work into it for so long.”

To their credit, the Diamondbacks make sure to check in regularly with Stennis to see how he’s doing. They also informed him that as soon as they are able, they will reinstate him full-time.

“They’ve been in constant contact throughout the whole thing, checking up on me,” Stennis said. “They’ve been really proactive in making sure that myself and others are doing well.”

All three men have different stories, but what they have in common is simple.

They want to go back to work in sports.

Gibson said the job wasn’t a financial necessity for him but, like Hardison, being so close to his favorite team made it a big part of his life.

“It was fun to do the job, it was fun to be with those people,” Gibson said. “So I value it very highly.”

If this turns out to be his last year with the Diamondbacks, Stennis said it would be a tough blow, but it’s one he is prepared to accept.

“I hold no ill will towards anybody,” Stennis said. “Being from the military, I understand it … It’s not ideal, but it’s what has to be done.”