Opinion: Save the Dells statements on September 15 Planning and Zoning recommendation for AED 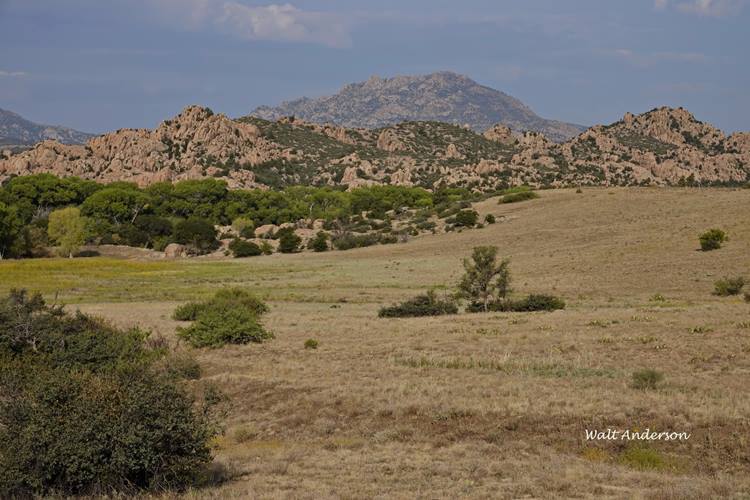 Save the Dells years-long campaign to protect the iconic Granite Dells took a major step forward September 15 when Prescott’s Planning and Zoning Commission (P&Z) recommended Arizona Eco Development’s (AED) proposed annexation to the City Council for their review. Save the Dells appreciates improvements made since AED’s devastating original subdivision plan was proposed in 2018, but significant questions remain unanswered, and important details must still be addressed.

Voter-approved Prop 400 gives the public a voice in major annexation requests, and with this P&Z approval, the required 60-day public comment period has begun. AED’s proposal lacks essential details, leading Commissioner Hutchinson to point out at the final hearing that “there’s not enough meat on the bones” to make informed comments.

City Attorney John Paladini suggested that critical details will be discussed by City Council when they review the Development Agreement, but that discussion won’t begin until AFTER the 60-day comment period. It’s impossible for the people of Prescott to provide meaningful public comment without access to these details now.

Save the Dells has concerns with Prescott’s P&Z Commission recommendation that Council accept AED’s application for their South Annexation.

Save the Dells’ proposal to preserve 500 acres of beloved land in AED’s development as Natural Open Space is based on a sound understanding of the landscape under consideration for roads, bridges, and tract homes. In the spirit of collaboration, and as a way to move the deal to a conclusion, we compromised during negotiations and agreed to a recent Letter of Intent outlining that AED would dedicate 475 acres as public open space.

The map the City of Prescott has circulated for months now shows 474 acres of Natural Open Space in AED’s South Annexation. It was revealed at the September 10 P&Z meeting that in reality that map is wrong. Although the map clearly labels 474 acres with Natural Open Space label and color, only 463 acres are actually going to be zoned as Natural Open Space. In an amazing display of wordsmithing, a City official admitted that the remaining 11 acres located along Highway 89 would be considered “open-spacey.”

As far as we can tell, “open-spacey” is not a zoning category in Prescott’s Land Development Code. Land not protected by the official Natural Open Space zoning is not protected from future development. The 11 acres around Highway 89 will be substantially reduced when the road is widened, and AED official Jason Gisi even suggested that the City bulldoze the rocks on one of the parcels to create a parking lot. These land uses do not meet the definition of Open Space in the City’s General Plan, so we cannot let the City pretend these acres are something they are not. 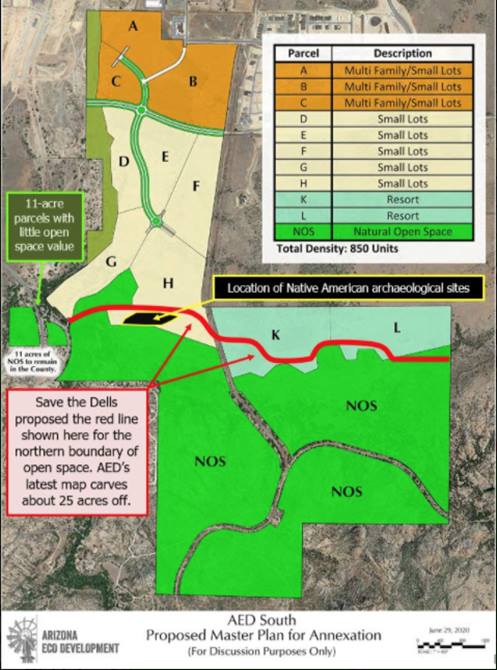 Instead of accepting the 11 acres along the highway as open space, we propose protecting Native American ruins scattered across ten acres located in the southern part of an area slated for housing. Some members of the P&Z Commission seemed to be genuinely concerned with this issue. However, with no detailed Development Agreement to reference or amend, the issue was left unaddressed.

Regarding the proposed resort, AED has requested—without details to support the request—that the proposed resort area be zoned Special Planned Community (SPC). Addressing the Commission, City Attorney Paladini supported that request, informing the Commission that the designation will be “SPC-Hotel.” Yet, the SPC zoning district does not include “hotel” as a permitted use (or even a conditional use), according to the LDC, Table 2.3 Use Table and LDC 4.13. It appears that Paladini and the P&Z Commission are recommending a “hotel” zoning classification for land that cannot be zoned for a hotel.

Issue 4: Public involvement is stymied by lack of information

These are the types of issues that need to be discussed and for which the public needs details. Without access to a draft Development Agreement—before its been agreed to by the City and AED—there will be no opportunity for meaningful public input.

We’ve witnessed P&Z grappling with these very issues. Sadly, at Tuesday’s meeting, when some tried to include recommendations for the Master Plan, there wasn’t enough detail to make them. Like Commissioner Hutchinson said, “there’s not enough meat on the bones.”

Paula Burr, Vice-chair of Save the Dells

2 thoughts on “Opinion: Save the Dells statements on September 15 Planning and Zoning recommendation for AED”