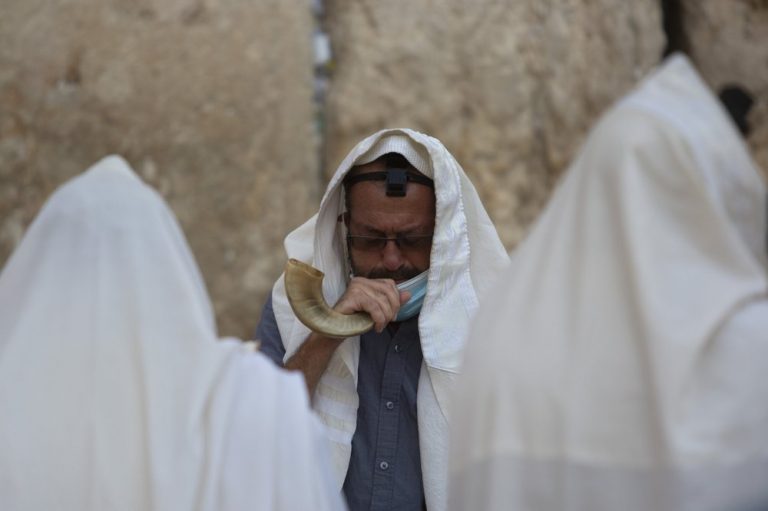 [Rosh Hashana started Friday night and runs through the weekend-editor]

Eating apples dipped in honey on Rosh Hashana is a Jewish tradition to symbolize a sweet start of the New Year. But in Israel, bitterness prevails on the eve of the holiday as the country faces a second nationwide lockdown to stem a raging coronavirus outbreak.

Now, the Jewish High Holidays look to be similarly subdued.

Israel has seen new daily cases of COVID-19 skyrocket in recent weeks, climbing to more than 5,000 on Wednesday — one of the highest per capita infection rates in the world. Since the pandemic began this year, it has recorded more than 169,000 cases, including 1,163 deaths, as of Wednesday, according to Health Ministry figures.

Religious and secular Israelis alike mark Rosh Hashana with festive holiday feasts with family and friends. They pack synagogues, often spending hours in prayer, especially during the fast of Yom Kippur, the Day of Atonement, which falls later this month.

But this year, traditional family gatherings will be muted, synagogue prayers will be limited to small groups and travel restrictions will leave many roads deserted. Some of the liberal streams of Judaism, particularly in the United States, are turning to technology to help connect people.

In Israel, movement during the lockdown will be restricted to within 500 meters (yards) of one’s home. Gatherings are limited to 10 people indoors, and 20 outside, restricting the number of faithful who can attend synagogue services. Bars, restaurants, and cultural venues will be shut, but many ritual baths and other religious facilities will remain open.

Israelis have been frustrated since the gains made with the first lockdown — when the virus seemed to have been brought under control — were erased within weeks, with authorities unable to stem the spike that followed. Weekly protests have drawn thousands to Netanyahu’s Jerusalem residence, with demonstrators demanding his resignation over his handling of the virus, the pandemic’s fallout and his corruption trials.

The lockdown rules have also deepened the rift between secular and religious Jews in Israel. A proposal to lock down only on communities with high outbreaks — mainly ultra-Orthodox areas where initial restrictions were ignored, allowing infections to surge — was scrapped, apparently following pressure from ultra-Orthodox leaders, before Netanyahu announced the nationwide lockdown.

Many Jewish worshippers elsewhere in the world will have to forgo synagogue services due to social distancing rules, hold prayers and hear the traditional sounding of the shofar — a ceremonial ram’s horn — on street corners or at home.

The Chabad-Lubavitch movement of Hasidic Judaism has recruited thousands of volunteers to blow the shofar at public squares and street corners worldwide. 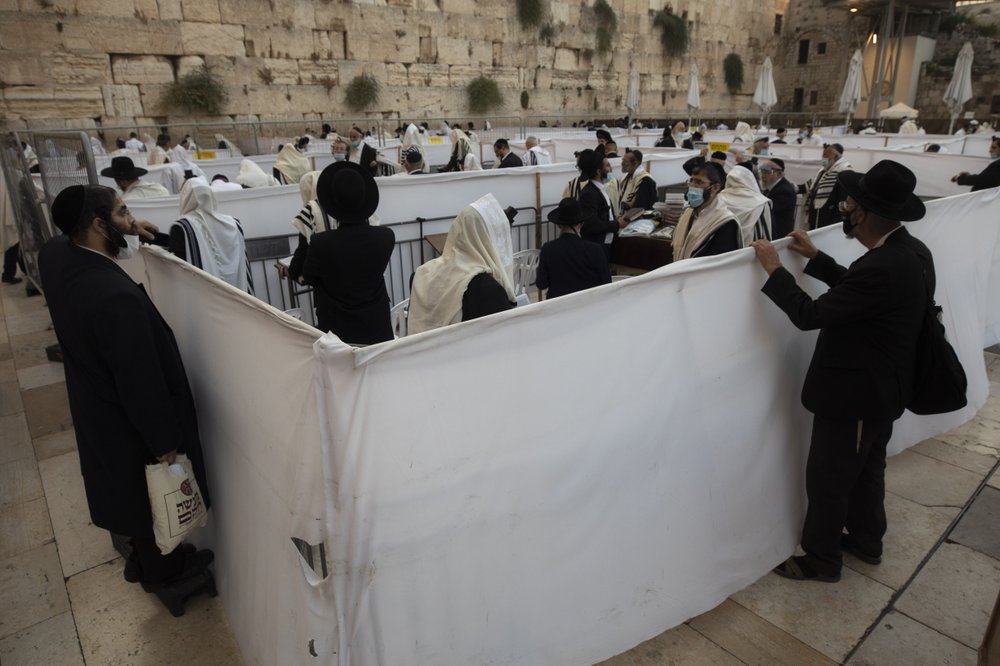 “The unique circumstances that leave millions outside the synagogue doors this year contain also the silver lining of helping them rediscover, reintegrate and celebrate the holiness of the true center of Jewish life — the Jewish home,” said Rabbi Zalman Shmotkin, spokesman for Chabad-Lubavitch.

An Israeli online application is helping pair shofar blowers with those who want to hear the horn in their neighborhoods.

In the U.S., more liberal Jewish streams have produced alternatives for congregants who use Zoom, Facebook and other digital platforms during the High Holidays.

The Union for Reform Judaism, North America’s biggest Jewish group, created the Reflection Project, a virtual experience designed to help people connect with spirituality through a series of activities.

“For non-Orthodox Jews, we have incredible opportunities through virtual prayer, gathering, learning and spiritual practice to be with others, and to learn and draw strength from being together,” Rabbi Rick Jacobs, president of the Union for Reform Judaism, told The Associated Press in New York.

With gatherings in synagogues across Israel limited to 10 worshipers, some Israelis are organizing services in courtyards and gardens. At Jerusalem’s Western Wall, the holiest site where Jews can worship, the plaza is crisscrossed with dividers to allow small groups to pray.

Jerusalem’s Great Synagogue, an Orthodox congregation that has hosted many Israeli dignitaries over the decades, announced earlier this week that because of the pandemic, it would not hold High Holiday services for the first time since it opened in 1958. 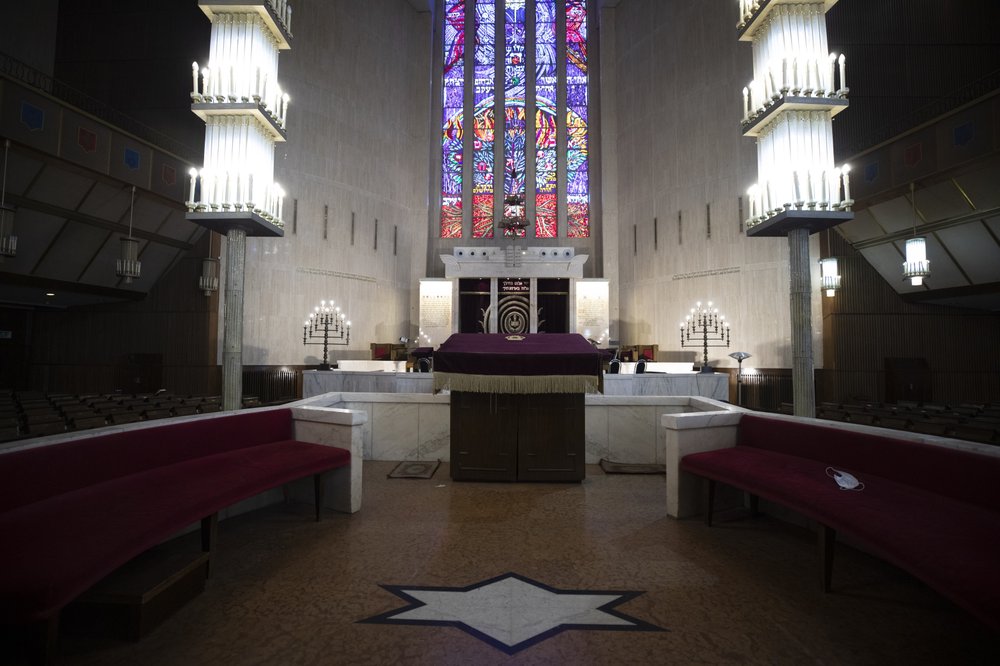 “It’s heartbreaking,” said Zalli Jaffe, president of Jerusalem’s Great Synagogue. “We believe that safety comes first. Sometimes we have to protect the congregation against the congregation.”

Addressing the country on Thursday, Israeli President Reuven Rivlin offered a message of sympathy over the lockdown.

Israeli police are sending out thousands of officers in a bid to enforce the regulations, with lockdown violators facing hundreds of dollars in fines. Still, officials are concerned many Israelis — skeptical of the government’s erratic and confusing regulations — may defy the lockdown.

“If someone travels before the holiday to relatives, they will apparently need to stay there for two weeks,” he told Israel’s Ynet news site.

For Moises Sandler, 26, this Rosh Hashana was meant to be the first family reunion around the holiday table in years. He immigrated from Mexico in 2018, joining two brothers already living in Israel. His parents followed suit this past year.

“It’s a bummer because we were planning to have this big dinner, have friends over,” said Sandler, who lives in Tel Aviv. His parents live in the suburb of Herzliya, several miles away.

“We don’t know even if we’re going to be able to do it all together.”