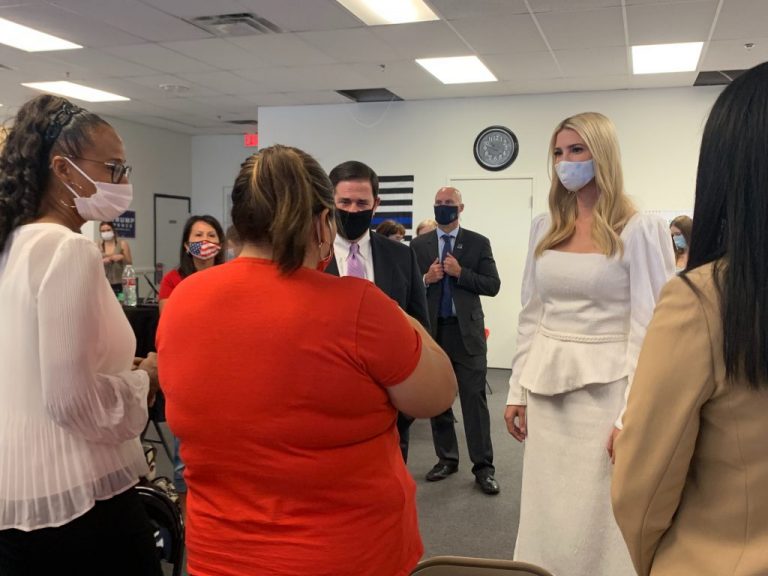 Ivanka Trump on Wednesday made a case for her father’s reelection, saying he is committed to business deregulation, tax cuts and supporting businesses through the COVID-19 pandemic, and she praised Arizona as a model for its response to the deadly disease.

Ivanka Trump spoke at an in-person business roundtable in downtown Phoenix hosted by Gov. Doug Ducey. It was her first visit to once solidly Republican Arizona since 2016; President Donald Trump has been here five times this year, the latest on Monday.

Ivanka Trump and Ducey wore masks as they entered the room, removing them at the start of the event. Business owners and leaders from across Arizona thanked her and her father’s administration for loans provided by the $2.2 trillion CARES Act passed by Congress, crediting them with saving their businesses during shutdowns.

“The Trump administration came out with the PPP loan, I literally applied for it in a week and had it in two weeks in our bank account to keep our lease going, our business going,” said Kayla Hernandez, owner of Luxury Skin Scottsdale.

President Trump’s response to the pandemic, which has cost more than 195,000 American lives since February, has been controversial, and public opinion is divided along party lines.

Critics charge that he failed to lead a national effort against the novel coronavirus and continues to dismiss and downplay the seriousness of COVID-19; supporters say he’s doing a good job combating a disease that’s being overblown by his opponents.

Arizona, once a reliably red state, in 2020 is considered a battleground state. Trump is trailing in the latest polls.

Ducey has consistently expressed support for the president and his policies, and his fealty earned him a trip to the White House in late August for Trump’s speech accepting the Republican presidential nomination.

“We are thankful for the policies and the partnership that we’ve been able to enjoy over the last four years,” the governor said, “and we are counting on continuing it for the next four years.”

President Trump has previously stated that he and Ducey have a “tremendous relationship,” and has praised Ducey’s efforts to fight COVID-19 in Arizona, even as the governor has variously been criticized and praised by local government leaders. Once a national hotspot for the coronavirus, Arizona has seen cases fall and steady in recent weeks.

At the roundtable, Ivanka Trump talked about the Paycheck Protection Program for small businesses, which was part of the COVID-19 relief package enacted last spring.

“I’m incredibly proud to have helped the president as we worked on this PPP program, which I think has been truly an extraordinary success,” Ivanka Trump said, adding that $8.6 billion in loans were given out to more than 85,000 businesses in Arizona.

Arizona, once a hotspot for COVID-19, has seen its number of new infections and deaths decrease since they peaked in early July.

The president’s daughter called Arizona a model for being “smart about dealing with the virus,” referencing a 90% decrease in the state’s seven-day rolling average relative to the state’s peak numbers.

Before the roundtable, Ivanka Trump and Ducey made a surprise visit to a Latinos for Trump office and met with supporters.

Her visit to Arizona comes at a time when Democratic nominee Joseph Biden is leading her father by an average of 5 percentage points in the state, according to the latest polling data. After her visit to Arizona, she was to travel to Texas and Florida for more campaign events.

Vice President Mike Pence will be in Arizona on Friday, after second lady Karen Pence’s campaign event on Thursday.