Arizona expected to clear over the next few days, but smoke could return 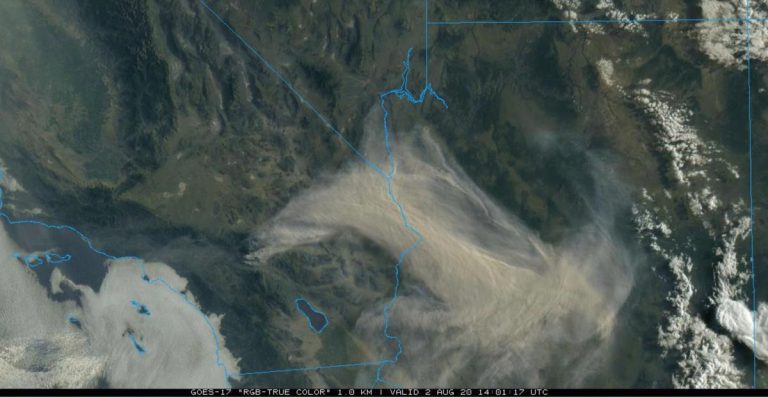 The smoke over Arizona is expected to clear this week, but meteorologists say it could return as wildfires fueled in part by climate change continue to scorch large swaths of Northern California, Oregon and Washington.

Scientists predict new wind patterns will move the smoke east and encourage clearer skies and higher temperatures in Arizona, while Portland, Seattle, San Francisco and other cities in the Northwest will continue grappling with air quality, considered among the worst in the world.

“The atmospheric patterns are such that we’ll probably see less smoke … for a while compared to what we’ve had,” said meteorologist Austin Jamison with the National Weather Service in Phoenix. “The smoke really has been high aloft, not at the ground level” in Arizona.

In addition to creating epic sunsets, the high-riding haze has cooled Arizona a few degrees.

“The smoke from the fires over California, Oregon and Washington collectively have had an effect on the weather here primarily because of reduced solar energy reaching the ground and keeping the temperature down a little bit, and keeping the high temperatures from reaching quite as warm as they would have otherwise,” Jamison said.

Upper-level winds will begin to shift back toward the east this week, which will limit smoke from raging Western fires, said Michael Crimmins, a climate specialist at the University of Arizona.

How long the fires will burn isn’t clear, but so far, an estimated 5 million acres have been charred and scores of people have died. And Crimmins noted that California is heading into the peak of its fire season, with annual Santa Ana winds typically increasing into October.

Heavy rain would provide some relief from smoke, but Arizona looks too dry at the end of the month to be hopeful, meteorologists said.

In addition to air-quality issues, the fires give us a glimpse of what the future of climate change may look like in the United States.

It is well-documented that climate change exacerbates the risk of wildfires in the western U.S., said Gregg Garfin, an associate specialist of climate science and policy at the University of Arizona.

“When we have really dry episodes, like this year, the increased temperatures also make it more difficult for firefighters to operate because cooler temperatures and higher humidities help calm fires overnight, and it affects firefighter safety via exhaustion,” he said.

Some of the fires burning on the coast were caused by humans, but how fast the wildfires spread, and the difficulty in containing them, is in part due to climate change and decades of forest management practices to put out fires. That has left many forests with dense foliage that fuels wildfires.

“Climate change is definitely part of the Western wildfire story this year as it is every year now,” Crimmins said, “but it is complex depending on the location. In California and Oregon, beetle-killed trees and increasing temperatures have increased fire risk across those forests, while a couple of unusual weather events, including a lightning storm in August and a wind event more recently, helped start fires and carried them on.”

The National Oceanic and Atmospheric Administration ranked 2020 as one of the hottest summers on record in the United States. If this trend continues, experts say, the West is likely to see more extreme wildfires and hazardous smoke in the coming years.

“Increasing temperatures, particularly when combined with drought, increase the odds of environmental conditions that are conducive to fire, and because climate change is a threat multiplier, we need to prepare well,” Garfin said.

PrevPreviousTakeaways: Trump’s town hall offered preview of debates
NextPlants that Screen for Privacy and a Sense of SeclusionNext