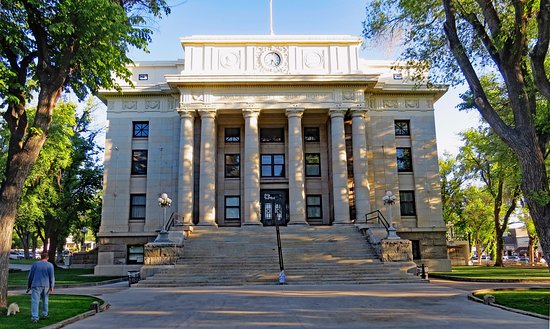 In what appears to be an Order containing erroneous references to the Arizona Rules of  Civil Procedure, Pro Tem Superior Court Judge Thomas Kelly, on Wednesday, September 9th,  denied a request by resident Bill Williams, to halt construction of a controversial new county jail in Prescott. The lawsuit, based in part on the county’s alleged failure to conduct a complete environmental impact study, was first reported in Prescott eNews on September 5, 2020.

Judge Kelly’s Order denying a Temporary Restraining Order,  refers to Arizona Civil Procedure Rule 64(b),  relating to the seizure of a person or property and is unrelated to the relief requested in Williams’ request for injunctive relief.  The Order also directs Williams to provide notice to the Board of Supervisors of his complaint. Williams has stated to Prescott eNews that his private investigator did in fact serve the defendants and that he has  proof of said service.  Judge Kelly’s Order of denial simply states that the plaintiff failed to establish the requirements of A.R.Civ.P. 64(b).  No other rationale was provided.  The Order was not accompanied by a written opinion.

Williams has also stated to Prescott eNews that although the Order is dated Wednesday, September 9th,  he was not informed of the decision or  given a copy of the Order until late in the afternoon of Friday, September 11th,  after learning that the Yavapai County Board of Supervisors had issued a Press Release touting their victory in the litigation.

Copies of Judge Kelly’s Order and the county’s press release are attached along with Mr. Williams’ response.  Opponents of the jail will hold a rally this Sunday afternoon at 3 pm,  on the grounds of the Prescott Valley Town Hall.  Mr. Williams is  a featured  speaker. He will update citizens on irregularities associated with the jail proposal and other county proposals such as the $30 million dollar bridge for the Verde Valley Connector.

Let me respond to Yavapai County claiming victory over my environmental lawsuit filed because of pollution on the new jail site. The county did not win, nor did I lose. In fact, the County never responded to my complaint. They did not offer me a copy of their news release. Apparently some lapdogs masquerading as reporters received the Supervisors’ commentary and ran it as if it were truth. The judge’s order should be read by all voters – not just a county news release.

If the judge wanted to do away with the case he would have dismissed it with prejudice, meaning no more things can be filed, but he didn’t. He left the door open. The judge, in his ruling, denies a “temporary restraining order” but my complaint does not request a Restraining Order. It is an injunction request.

In addition, there is an implication the supervisors were not served the papers, yet I have proof of service, by a Prescott private investigator who served the supervisors and then filed it with the clerk; on the top right corner of the service document is our County Clerk, Ms. Donna McQuality’s, official court stamp and seal, which means it is in the lawsuit file. The judge may not have received a copy.

The interesting question though is: why did he make a ruling in five days, including a two day weekend, without a reply brief from the County? An attorney who Sheila Polk (county attorney) assigned to her losing lawsuit against former state attorney general Tom Horne was assigned to my case, but he never opined.

I respect the judge but let me describe a court in turmoil. Judge Tom Kelly is a respected local attorney who has been brought in to fill vacancies on the court. It’s kind of like an emergency hiring of an attorney to fill a judge position. Nothing wrong with that. He was given an office and then I am told he had to move again as one judge was moved to take the Presiding Judge Mackey’s place. Last week Judge Kelly’s assistant apologized to me for her phone going down and Friday she apologized for her computer going down. She is working from home. I’m not sure where the judge is working but his current courthouse phone says:  “this number has been disconnected.”

So I will soon file a type of Motion in the case (the case is not closed) that points out I did not request a “TRO”  – temporary restraining order, mine is an injunction that deserves testimony – testimony about 13 pollutants, 1 landfill, septic tanks, three water wells, underground storage tanks – all uphill from riparian trails, Granite Creek and Watson Lake. The county’s environmental engineer says all this, in his 360 page report. I will attach to that next pleading the service of process that the Judge never got but the supervisors did get.

I will be diplomatic yet firm because the court is in turmoil… it is short of judges, the court has held telephonic hearings (not in person hearings) for  some time; no one argues cases in a courtroom until the Covid restrictions are lifted. The court personnel were asked to leave by about 2 pm on Friday the 11th because Black Lives Matter protesters were ringing the courthouse, and Sheriffs and local police were ringing the courthouse. So let’s be patient. Let’s realize a judge who has never been a judge before, but is a great attorney, is assigned to the case, in a courthouse full of turmoil.

The county’s commentary on the judge’s ruling describes a Notice of Claim I filed on August 18th for the exorbitant cost and political reasons we all believe in regarding the new jail construction. And in a Notice you have to give a dollar amount of damages, as I did, according to court rules. I hadn’t filled one out before so I inserted a dollar amount that sounded prudent. The Notice was attached to the Injunction Request and mentioned in the Injunction so as to be transparent to the judge. The County has not responded to that Notice either.

A whistleblower gave me a copy of the Environmental Assessment (EA) done on the polluted ground for the new jail a few days after I filed the Aug 18th Notice. The EA changed my strategy. It now includes environmental issues. I always wondered why it took so long for the County to share that Environmental Assessment with the public and I don’t see a contractor’s contract award on the County website. Perhaps citizens should ask for that under the Arizona Open Records Law (I’m a little busy).

The county commentary says one division within the Arizona Department of Environmental Quality (ADEQ) has done an inspection – the solid waste division. That still leaves the Groundwater Bureau and the Underground Storage Tank Bureau, and others to opine. On Friday, the ADEQ Ombudsman emailed me to say, there are multiple people looking into the jail site at their Phoenix headquarters. In the ADEQ Solid Waste Bureau report, the inspector lied when she stated there is a fence all the way around the site where they are bulldozing. If someone brings me a photo of a fence all the way around the property, I will buy them a cheeseburger.

But let’s not jump to conclusions. Be patient. This is a 9-inning game. So what if we’re down one run in the third inning. At Sunday’s 3 pm meeting on the lawn of Prescott Valley Town Hall, I will cover many issues and I understand some want to talk about the $30 million bridge the Supervisors are cramming down voters’ throats like they are their $86 million jail.  In due time, more pleadings will be filed in the case that has not yet been won or lost.