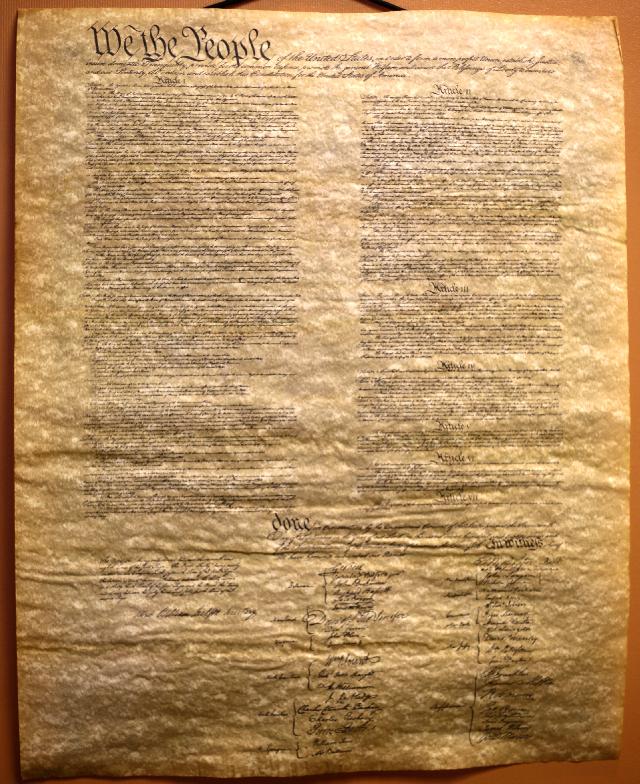 Point: Who Can Save Our Constitution? Only We, The People

What is a constitution?

A democratic constitution, however, means little on its own, no matter how broadly and fairly it’s written. Words cannot enforce themselves. Words, under glass in a museum, cannot make someone do something they don’t want to do, or prevent them from doing something they’re determined to do.

No, what makes a constitution work in a democratic society are the people — people in the corridors of power and in the street, from presidents to the general public — who agree to follow and respect its text, history, and values without being forced. For a constitution to last, that respect must flow from the generation of those who drafted it, through all the generations that follow,  even through vigorous disagreements about what words should be in our national charter and what those already there mean. Every generation must agree to renew that founding commitment and, when necessary, reconstruct it — even fundamentally remake it.

No greater example of this constitutional patriotism exists than the tireless resistance of abolitionists such as Frederick Douglass, who refused to let his fellow Americans turn their eyes away from the colossal chasm between our professed founding ideals of freedom and the fact that the nation allowed the  brutal  enslavement of human beings. Knowing our Constitution, even with its flaws, could be wielded for emancipation, Douglass and subsequent movements of the people ended the nation’s original sin of chattel slavery, and continued to fix founding mistakes, bringing more people under the Constitution’s protection and expanded our democratic society.

We owe gratitude to those who ensured the full promises of liberty and equality were actually written into our national charter, and now we must breathe life into these words. We do this by investing them with meaning and power, striving to wring from them every drop of hypocrisy, and holding the faithless among us accountable to them. We do this by telling one another, every day — both as individuals and through our institutions — how our Constitution’s words are supposed to settle disputes about who has power in our society, who in our society may get key resources and, ultimately, what course our nation will take into the future.

What are we doing about the fact that the words of our Constitution guarantee equal protection of the law for all, speak of equal citizenship for all, yet police violence against Black people continues, unaccountable to justice? Have we stopped caring about enforcing our Constitution’s manifold protections of the right to vote against discrimination based on race, sex, age or ability to pay any kind of tax? Or its powerful stand against religious tests, or its monument to the rule of law? Are the words of the framers in Philadelphia — and of the framers of critical amendments adopted after the Civil War, the Progressive Movement, and the Civil Rights Movement — gradually reverting to being merely words on parchment under glass at the National Archives?

From Kenosha, Wis., and Minneapolis to Los Angeles and Washington, D.C. — and countless cities and towns in between — people in America are taking to the streets, taking to the ballot box, and taking our leaders to task. They are demanding, in the final analysis, that our nation live up to promises made in our amended Constitution: Equality. Justice. The right to vote free from discrimination. Leaders accountable to the rule of law.

We have seen all too often of late that political leaders and institutions will fail us. But our Constitution doesn’t begin with “We the Leaders.” It begins with “We the People.” We are the source of its strength and the wellspring of its meaning. Only we can do the hard work of giving it life, and of protecting it for the generations who follow us. I believe we will.

Elizabeth Wydra is president of Constitutional Accountability Center, a public interest law firm and think tank dedicated to promoting the promise of the Constitution’s text, history and values. She wrote this for InsideSources.com.

Counterpoint: Our Republic, Can We Keep It?

On September 17, 1787, while leaving the just-finished Constitutional Convention in Philadelphia, Benjamin Franklin was purportedly asked whether the delegates had produced a republic or a monarchy. He allegedly said, “A republic, if you can keep it.” Now, 233 years later, our constitutional republic has been substantially eroded. It is time to rediscover to the founding principles of our Constitution if we want to last an additional 200 years.

The current violent clashes in our streets have many causes, but they are partly about what kind of country each side desires. This presidential election year, as with essentially all election years in the 21st century, has been touted as an existential threat by both sides of the political aisle. Many people feel that, if the “other side” takes the presidency, then there will be a concerted effort to destroy their way of life.

While American elections are rarely as existentially threatening as pundits and partisans claim, it’s understandable why people feel this way. Congress has basically been a do-nothing body for more than a decade. The presidency has become the focal point of policy making and policy change in the federal government. Who the president is matters more now than ever before.

But it wasn’t supposed to be this way. To the Framers, Congress was the central player in our federal government. Due to their frequent popular election by relatively small and homogenous constituencies, members of the House would help harmonize the interests of the country by vigorously fighting for both local and national interests. Senators, who in the original Constitution were chosen by the state legislatures, would compose the senior deliberative body, which, because of the longer terms and statewide constituencies, would look more toward the long-term health of the country.

Seemingly no Framer imagined, however, that Congress, rather than jealously guarding its power, would freely and gladly give it to the executive branch. Over the last 90 years, Congress has passed statute after statute that empower the executive branch with immense discretion not only on how the laws will be enforced (the classic role of the executive branch) but even what the laws say.

But an overly powerful executive branch is not just a feature of the Trump administration. Trump inherited the stunningly broad powers of the presidency because almost every past administration has increased the scope of presidential power. The Obama administration purported to redefine the concept of gender when it came to public school bathrooms by publishing a “dear colleague” letter instructing schools to let students use the bathroom of their gender identity. As a supporter of transgender rights, I was nevertheless shocked the administration would so casually force such broad social change. Transgenderism and bathrooms is the type of issue that should be debated in Congress, not imposed by the president.

But Congress doesn’t work, so we’re left with a president who has powers that even King George III didn’t have. No wonder people view a presidency of “the other side” as an existential threat. Under current law, an opposing president can switch significant environmental regulations, impose “national emergencies” to solve pet projects, radically restructure immigration, significantly alter regulations on businesses, and even fight undeclared wars, all without asking Congress to do anything.

This is no way to run a constitutional republic. Although today the Bill of Rights is the most known part of the Constitution, when the delegates left the Convention there was no Bill of Rights. The debates in the convention were about constitutional structure — how the separation of powers, checks and balances, and other guardrails of the Constitution could ensure a limited, effective, responsive and democratically accountable federal government. Now, too many of those guardrails are either broken or completely disregarded. In a country as big and diverse as America, we cannot continue to exist in a state of perpetual presidential whiplash.

Our republic is eroding. Can we stop it?

Trevor Burrus is a research fellow in the Cato Institute’s Robert A. Levy Center for Constitutional Studies and editor in chief of the Cato Supreme Court Review. He wrote this for InsideSources.com.

PrevPreviousAs workers call for aid, Senate again stalls on COVID-19 relief bill
NextOpinion: If Biden Is Elected, There Is Far More to Fear Than ViolenceNext