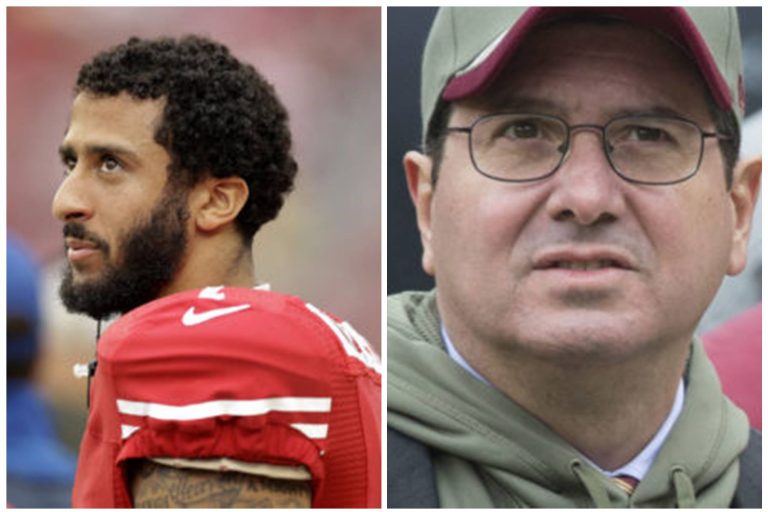 Point: The NFL Can’t Avoid Politics Even If It Wants To

The NFL season is approaching, and it arrives into a much different world than the one in which the Kansas City Chiefs won the Super Bowl.

In the long months since, a pandemic has killed more than 180,000 people in America, league schedules have stopped and restarted as the country grapples with how to reopen, and historic protests for racial justice have spread across the country.

Oh, and Tom Brady no longer plays for the New England Patriots, and the Washington Football Team has — at least for now — shirked its racist name.

A lot has changed. And the question is: How will the NFL, a league notoriously averse to change, adapt to this different reality?

On the COVID-19 front, the signs aren’t encouraging.

Some owners are still beating the drum to put fans in the stands, with Dallas Cowboys owner Jerry Jones leading the charge for attendance. That could cause needless harm to thousands of Jones’ own fans and their communities.

It’s not even clear the players themselves can proceed safely.

While the latest round of testing turned up no player infections, infection rates can flame up rapidly. That’s what happened in Major League Baseball, where nearly 40 games have been postponed due to outbreaks among players. And football is a much higher-contact sport than baseball.

On other cultural fronts, the league will have to continue grappling with its misogyny problem. The NFL leadership’s flailing reaction to a continuing sexual harassment scandal at the Washington Football Team is a tragic continuation of familiar patterns.

But perhaps no issue will get more scrutiny than how the league handles the country’s resurgent movement for racial justice and the new political realities it has ushered in.

It has been just four years since San Francisco 49ers quarterback Colin Kaepernick kneeled during the national anthem to protest police brutality. He was ostracized from a league that feigns political neutrality to preserve its profits — even if they conveniently ignore the vocal Trump support of players like Richie Incognito, and not to mention many owners.

Now, the NFL does not have that luxury.

The changing world has meant that it cannot feign ignorance any longer, and it will not be able to placate players with meaningless publicity stunts from owners like Jones, a vocal Trump supporter who contented himself with kneeling photo-op with his players before the anthem.

Meanwhile, player walkouts in other leagues — the NBA, WNBA, MLB, NHL, and MLS — in response to the Kenosha, Wisconsin, police shooting showed not just the urgency of this issue but the power that labor actions by our most public and popular figures can have in America.

Some teams are beginning to take bolder stands in the racial justice arena.

The Baltimore Ravens, led by their players, put out a statement detailing a series of specific actions they want to see in the fight for racial justice. It includes arresting the officers responsible for the murder of Breonna Taylor in Kentucky and the shooting of Jacob Blake in Wisconsin, as well as the end of qualified immunity for abusive officers and prison sentencing reform.

To my eyes, this is an incredibly important — and surprising — action from the Ravens. But that is just one organization in a league dominated by conservative owners and vocally attacked by the president for giving any quarter to player protests.

It remains to be seen how many other teams will follow suit. My hope is that more players will take inspiration from the actions of other leagues and from the Baltimore Ravens and take stronger actions for racial equality.

It also remains to be seen how the fans respond. Of all the major sports leagues, the NFL’s fan base is the least partisan, which is a big reason the league has tried in vain to avoid engaging with the issues. But for all the talk of conservative fan boycotts over players kneeling and otherwise expressing support for racial justice, it hasn’t really borne out with the TV ratings.

As much as many of us would like to just watch football and forget about the rest of the world, that’s just not possible when holding games at all becomes a statement on the pandemic, public safety, racial justice, or the other issues of our time.

At a time when players in other leagues are discovering their power, NFL players need to find theirs too.

Brian Wakamo is an inequality researcher at the Institute for Policy Studies. He wrote this for InsideSources.com.

Counterpoint: Future of Football Is the Team With No Name

With the National Football League poised to alienate a majority of its fans this season by going completely woke, its least-popular team owner can emerge as the man who saves the sport from itself.

Help us, Dan Snyder! You’re our only hope!

Soon after New Orleans Saints quarterback Drew Brees apologized for allegedly “insensitive” comments that he would “never agree with anybody disrespecting the (American) flag,” NFL Commissioner Roger Goodell waved a flag of surrender to the mob. “We the National Football League admit we were wrong for not listening to NFL players earlier,” he declared from his bunker.

While it’s unclear what might emerge from this Pandora’s huddle, it does seem likely to turn off many loyal fans.

If there even is a pro football season this year, don’t expect anyone to enforce the 2018 policy that players “shall stand and show respect for the flag and the (national) anthem.” After Goodell’s capitulation, several players immediately announced they’d take a knee this season. And Goodell even said he would  “encourage” a team to sign has-been quarterback Colin Kaepernick — the kneeler-in-chief who has since gone on to monetize his activism and create a media empire.

The NFL will attempt to prove it isn’t racist by playing the gospel song “Lift Every Voice and Sing” — the “black national anthem” — alongside “The Star-Spangled Banner” during the first week’s games. Players will also be “wearing their hearts on their feet” through the “My Cause, My Cleats” program and will feature social justice branding on helmets, jerseys and the field itself.

And the anthems? A recent Yahoo News/YouGov poll found a majority of NFL fans want players standing. More important, fans opposed to kneeling expect to watch markedly fewer games (and the lucrative commercials that play during them) once the NFL goes woke. Black fans say they think the black anthem is simply “pandering.”

A lifelong fan of the Washington Redskins, he made his fortune in marketing and bought the team 20 years ago. Despite the 2013 statement that he’d “NEVER” bow to protests and change the team’s name, the wave of wokeness forced him to “retire” the name in July.

In a stroke of genius, he didn’t quickly settle on a new name. For now, the controversial former Washington Redskins are the bland Washington Football Team. Critics call this “ridiculous,”  but it’s certainly not offending anyone like the Vikings, Chiefs and 49ers do.

He owns a blank slate in a league at risk of losing its way and losing its fans. This is a unique opportunity to put his marketing know-how to work and make a statement about the politicization of professional sports, if he’s got the guts, he could bring the NFL back to neutral.

What he must do is make gameday a politically correct spectacle.

It should be obvious that cheerleaders are out. But so should be excessive fan cheering, monitored by security made up only of social workers (with police protection defunded, come at your own risk). No sacks or touchdown dances.

No excessive scoring. In baseball, Fernando Tatis Jr. of the San Diego Padres (another team name that needs changing!) was recently forced to apologize for hitting a grand-slam home run because his team was already up seven runs late in the game. The Washington Football Team should never allow such grandstanding.

Forget about hot dogs and nachos. New concessions will focus on healthy fare like tofu Not Dogs. Beers? Please! Kale smoothies (no straws) are loaded with antioxidants and nutrients. And don’t think about pre-gaming in the parking lot — tailgating will be prohibited because all the good spots will be reserved for pricey hybrid and electric vehicles.

In other words, no fun.

Someone must do something, because Goodell has abdicated authority to the woke scolds. In making a spectacle, at least for one game, the Washington Football Team could draw enough attention to football’s dystopian future to bring sanity back to sports.

It’s a costly prospect, but Mr. Snyder is a billionaire. Bringing the NFL back to its senses? That’s priceless.

David W. Almasi is vice president of the National Center for Public Policy Research, a Washington think tank. He wrote this for InsideSources.com

PrevPreviousPresident Trump’s 20 additions to his Supreme Court list
NextOpinion: More Could Work From Home If States Would Let ThemNext