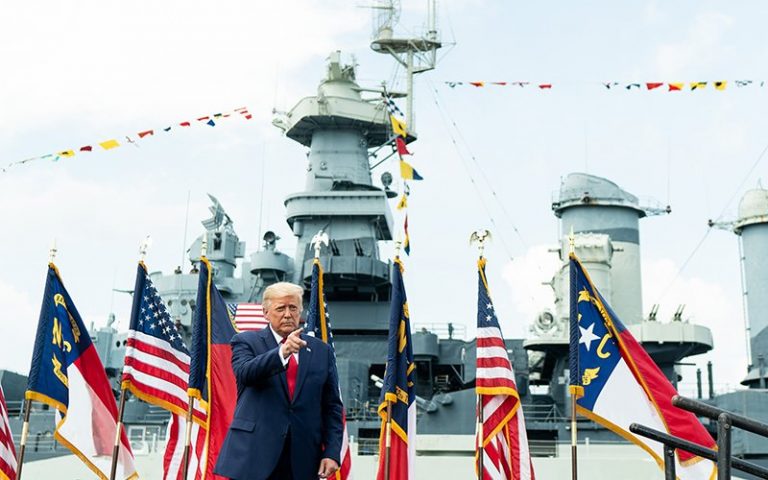 The commander in chief has previously made harsh comments about McCain but denied the accuracy of the report in The Atlantic Thursday, which relied on anonymous sources to report that the president pushed back against plans to visit a World War I memorial and cemetery where American military are buried during a 2018 trip to France.

The Atlantic reported that Trump said the cemetery is “filled with losers,” and referred to the more than 1,800 Marines who died in the nearby battle as “suckers.”

The White House said the visit was canceled because of foggy, rainy weather at the time, Trump told reporters Thursday night.

Trump also called the story “fake” in a tweet Friday, denying he made the comments.

While the sources in The Atlantic spoke to the magazine on the condition of anonymity, the Associated Press has since independently confirmed many of the comments.

Rep. Ruben Gallego, D-Phoenix, a combat veteran who was deployed to Iraq with the Marines and a vocal critic of Trump, tweeted Thursday that Trump has “no honor” and “can never understand the sacrifice” of American service members.

“Even in a thousand lifetimes Trump couldn’t come close to matching the honor, courage, & commitment of the men I served with & the men we buried,” Gallego wrote.

A spokesperson for Sen. Martha McSally, R-Arizona, said in a statement that McSally “has no interest in moderating a fight between The Atlantic and the president over anonymously sourced accusations that have been debunked on the record. As a combat veteran herself, her views on the military and the heroes who sacrificed so much to protect our freedoms are well-documented.”

Despite his denials, Trump has openly criticized McCain in the past. In 2015, Trump said he did not consider McCain, who was a prisoner of war for more than five years during the Vietnam War, to be a war hero because “I like people who weren’t captured.”

In comments made to the media Thursday night, Trump said he “disagreed with John McCain” but that he “still respected him.” Trump also brought up McCain’s 2018 funeral as an example of how he respected McCain, a point he echoed on Twitter, saying he approved funeral plans “without hesitation and without complaint” because he felt McCain “deserved it.”

Yet, Trump’s negative comments about McCain have continued since McCain’s death, and his daughter Meghan McCain took to Twitter to say that Trump has been “vile and disgusting” toward her family.

Arizona Gov. Doug Ducey has not commented on the controversy but shared a video on Twitter Friday morning of McCain accepting the Republican nomination for president at the 2008 Republican National Convention.

In the clip of McCain’s speech that Ducey shared, McCain urges the audience to “stand up to defend our country from its enemies” and to “stand up for each other.”

The Trump administration also faces criticism for a Pentagon memo announcing the closure of Stars and Stripes, an independent news organization that caters to the U.S. military community.

Sinema was part of a bipartisan group of 15 senators that sent a letter to Defense Secretary Mark Esper on Sept. 2, asking him to reverse the decision and provide Stars and Stripes with the necessary funding.

Gallego called the defunding of Stars and Stripes “another attack on the Press.”

Trump tweeted Friday afternoon that Stars and Stripes funding would be restored.

In a news conference Friday, representatives who served in the military said Trump’s continuing comments against McCain and the issue with Stars and Stripes was reflective of the larger relationship between Trump and the U.S. military.

Rep. Mikie Sherrill, D-N.J., said Trump started his administration off on a “bad foot” with service members when he had “undermined” the service of McCain.

The representatives on the call agreed that despite Trump’s denial, his history of comments against the military and service members made The Atlantic report believable.