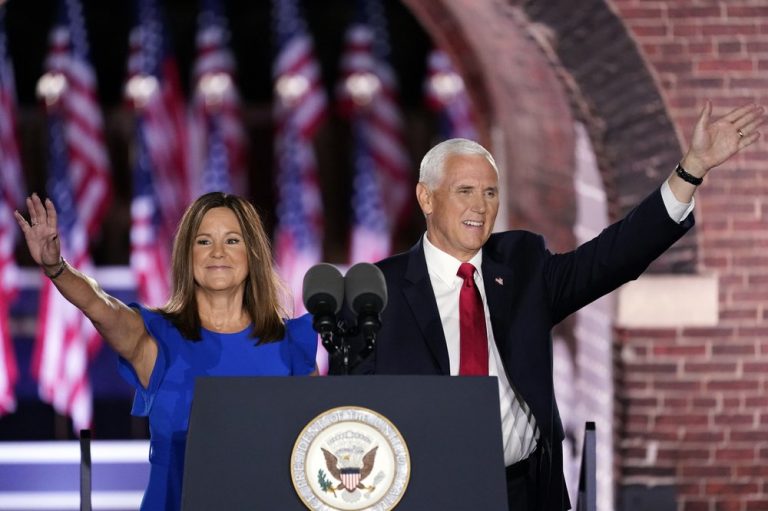 Republicans proceeded with the third night of their national convention, but many Americans — particularly those in the path of Hurricane Laura — were focused on more immediate concerns.

The attack role often assigned to vice presidential candidates is an ill-fitting suit for the typically genial Vice President Mike Pence, but on Wednesday he took it on, with relish.

He also laid bare the case that he and President Donald Trump will press in the fall campaign, with an emphasis on backing law enforcement, while saying little about Black Americans killed or maimed by police shootings. “We’re not going to defund the police,” Pence said.

“Joe Biden said America is systemically racist,” Pence said, criticizing the Democratic challenger as soft on crime. “The hard truth is you won’t be safe in Joe Biden’s America.”

In a speech from Fort McHenry in Maryland, the site of the 1812 battle that inspired “The Star-Spangled Banner,” he added: “Law and order are on the ballot. … The choice in this election is whether America remains America.”

With Trump trailing in the polls, Pence has endured months of rumors that he could be replaced on the ticket. But the president has singled him out for praise repeatedly in recent weeks, and his place, decidedly second to Trump, seems safe.

The president joined Pence onstage after his speech.

A political convention is the most scripted, tightly controllable of events, especially when it is mostly virtual and much of it is prerecorded.

That is, until events beyond the control of convention planners make the political ritual seem almost inconsequential.

As Republicans gathered, a massive hurricane was taking aim at the Gulf Coast, wildfires continued to scorch California and the National Guard was being deployed to a city in the battleground state of Wisconsin after a white police officer shot a Black man. And all the while a deadly pandemic continued to claim the lives of nearly 1,000 Americans a day.

In true Trump style, though, campaign officials said the show must go on, so far anyway.

Officials said the president had been regularly briefed and may visit the Gulf by early next week. But the hurricane threatened to shine a spotlight on Trump’s poor handling of other disasters, including Hurricane Maria, which ravaged Puerto Rico — and, even more dramatically, the pandemic itself.

TRYING TO REGAIN SUPPORT OF WOMEN

Republicans offered an emotional appeal to female voters Wednesday, looking to shore up support from a group that has abandoned the party in droves since Trump took office.

Some of his most loyal aides, including senior counselor Kellyanne Conway — in her final days in the White House — and press secretary Kayleigh McEnany, spoke about the president’s support for women within the West Wing, following second lady Karen Pence’s tribute to the 100th anniversary of the ratification of the 19th Amendment, which allowed women to vote.

But Trump has work to do.

He lost the votes of women handily to Hillary Clinton. Things have only gotten worse since, polls show, with many female voters turned by his harsh policies and manner. That trend accelerated ahead of the 2018 midterms, on the heels of the administration’s enforcement of a policy that separated immigrant children from their families at the southern border, and Democrats rode the votes of suburban women en route to retaking control of the House.

The erosion has continued amid criticism of Trump’s handling of the pandemic. His campaign is hoping Wednesday’s repeated homages to women can prompt a reset.

ODE TO POLICE, NOT TO VICTIMS

Over and over, Trump’s allies highlighted the heroism of police Wednesday night. But listening to the program, you’d wouldn’t know that an unarmed African American man was shot in the back multiple times by a Wisconsin police officer just three days earlier as his children watched.

It was essentially ignored by the Republican convention speakers. They did, however, reference the large protests against police brutality which have been overwhelmingly peaceful but have led to incidents of violence and looting. Wednesday night, the National Guard was on hand in Wisconsin to try to quell violent protests.

Former professional football player Jack Brewer, the first person of color featured in the program more than an hour after it began, cheered Trump’s impact on the Black community and condemned what he called the “so-called Black Lives Matter movement.”

And Tennessee Sen. Marsha Blackburn repeatedly praised what she described as heroes in law enforcement and she slammed the Democratic White House ticket.

“Joe Biden, Kamala Harris and their radical allies try to destroy these heroes, because if there are no heroes to inspire us, government can control us,” she said.

NOTABLE IN THEIR ABSENCE

Elected officials like Blackburn and South Dakota Gov. Kristi Noem heaped praise on Trump Wednesday night. But it’s worth noting which Republican officials did not.

Such exclusions may be becoming common in the Trump era, but they are not normal.

Conventions are designed to convey a sense of party unity heading into the final phase of a presidential election. Democrats last week featured all three of their former living presidents and elected officials across the political spectrum.

But Trump’s GOP has alienated once respected leaders like Bush and Romney. And vulnerable Republican officials still in office risk making their November election more difficult if they align themselves too closely with their party’s divisive leader.

ANOTHER SPEAKER DOESN’T MAKE THE SHOW

For the second consecutive night, Trump’s campaign was forced to reshuffle its speaking lineup just hours before the prime-time program began.

Organizers confirmed Tuesday morning that Robert Unanue, the president and CEO of Goya Foods, would be featured in the convention as part of the president’s opposition to “cancel culture.” Goya faced boycotts earlier in the month after Unanue publicly praised Trump.

But by early evening, the president’s team had canceled the CEO’s appearance, citing “a logistical problem.”

While viewers may never know about the lineup tweaks, they were at best a minor embarrassment and at worst evidence of incompetence for what is supposed to be a most carefully planned event.

On Tuesday night, Trump’s team was forced to pull another featured speaker, “Angel Mom” Mary Ann Mendoza, after she directed her Twitter followers to a series of anti-Semitic, conspiratorial messages hours before her prerecorded segment was set to air.