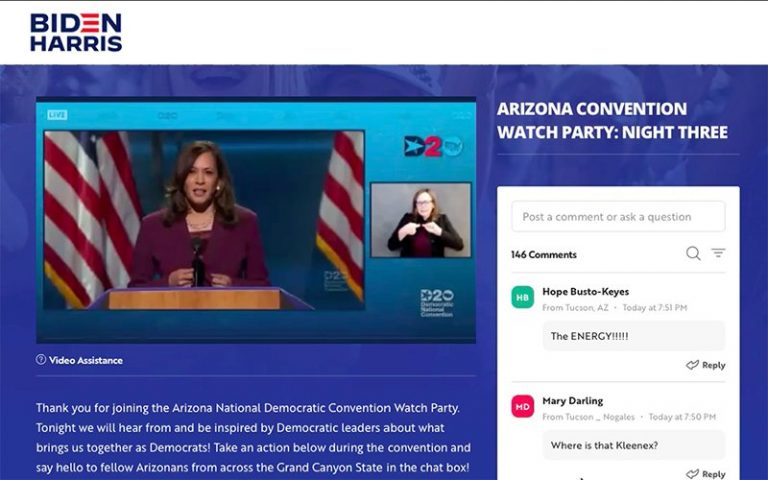 They couldn’t provide the balloons, but organizers of hundreds of virtual watch parties did provide the camaraderie for thousands of Arizonans who gathered around their laptops to watch the Democratic National Convention this week.

Organizers at Mission for Arizona said they coordinated close to 200 virtual watch parties this week. The online gatherings drew an estimated 7,000 Democrats and other interested voters to watch the first-ever virtual convention, while remaining socially distanced themselves.

“You look at what is the core of an event, like why do people enjoy going to somebody’s house or going to a field office and watching the convention together,” said Patrick Gage, East Valley regional director at Mission for Arizona. “They enjoy talking with each other.”

Party attendees were able to watch the convention live together, and then talk over Zoom or message through a chat-based platform called Brandlive. While the goal was to reach as many voters as possible, Gage said that what makes the format effective is more parties and shorter invite lists.

“What the smaller parties allow us to do is … have parties that focus even more exclusively on someone’s own kind of friend group or their own geographic area, so we can reach people that we wouldn’t have been able to reach before,” Gage said.

That pays off in communities like Nogales, said Mary Darling, chair of the Santa Cruz County Democratic Party.

“A lot of us that are in rural counties in Arizona, this is actually working out better for us” than traditional in-person watch parties, said Darling, who tuned in to a friend’s watch parties this week and planned to host her own for the final night of the convention Thursday.

“I’ve heard so many folks that normally wouldn’t have watched are watching and they’re finding it really interesting,” she said.

“When we’ve hosted in-person events, we are very conscious of the time of day and the time of year, frankly, because during the monsoon season, driving on … two-lane highways with minimal lighting is not helpful to bring people to the event,” she said.

“We don’t want to say, all right, well, if you can’t, you know, pay for the ticket to come out to Milwaukee then I guess you just don’t get to experience the convention,” he said. “That’s not what Democrats should stand for.”

Darling said there’s another advantage to virtual watch parties in a time of the COVID-19 pandemic.

“I think we’re being. as a party, very responsible,” she said. “Frankly, by not having people meet in person and really try to reduce, you know, those opportunities but still finding a way to bring the community together. And that’s a good thing.”

Gage said he hopes the party learns from this year’s convention as it ponders 2024.

“The in-person stuff is great, the conventions are a fabulous experience. But very few people get to see that,” he said. “So how can we keep the in-person event, you know, as long as it’s safe in 2024, but make it more accessible?”

Darling said when she originally heard that the convention might go virtual, she found it “really weird and felt really awkward, though I have found it to be super entertaining.” But she said there are some elements of a convention that the virtual parties will never be able to replace.

“There’s this feeling of where are the balloons? There needs to be balloons,” Darling said.

PrevPreviousWhose party is it?: Democrats cite Republican support for Biden
NextArizonans for Health and Public Safety Prepares to Oppose Prop 207 in NovemberNext