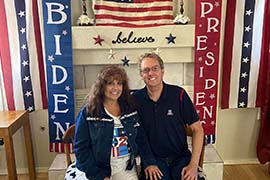 Something gets lost in the convention experience when it is held online, as this year’s convention has been, the Arizona delegates said.

“We’re missing the camaraderie and just the energy that exudes during a convention, and missing out on meeting other delegates as well as opening up lines of communication across states,” Ford said. “They may be doing something we haven’t even thought about.”

For Engstrom, who admits to “feeling a little lost” as a first-timer, it is an honor to be a delegate but unfortunate that “we can’t be together as a whole group.”

“You miss that part because it’s that meeting and learning with people from across the country,” Engstrom said. “We can do stuff on Facebook and do Zooms here and there, but that connection is a little hard to make.”

Democrats originally planned a traditional convention in Milwaukee, where thousands of delegates, party officials, reporters and others were scheduled to gather in mid-July. But the ongoing COVID-19 pandemic forced the convention to be pushed back and then to be canceled in-person because of concerns of bringing that many people together.

Now, convention meetings and party business are conducted online. Speeches – including former Vice President Joe Biden’s acceptance speech – will be delivered remotely. Instead of partying and networking at packed convention events, Ford and Engstrom are watching the convention unfold from their homes, like everyone else.

She describes this year’s convention as “bittersweet.” When she talks about previous conventions, she recalls “the energy, you know, people are crying and you’re hugging folks.”

“The balloons dropping and the music playing while your next candidate is on the stage while people are screaming and clapping,” Ford said. “People pack themselves into those venues- probably more of them than there should be in those buildings.”

Ford said she feels bad for first-time delegates who are missing out on the convention in person.

“It’s like a football game,” she said. “They’re fun to watch on TV, but being at the game makes all the difference. I don’t
think we’re missing the bottom line of it, but I think part of the experience is lost.”

Engstrom said she said she can only imagine what that must be like.

“I was fortunate enough to go to the inauguration when President Obama was sworn in along with Vice President Biden,” she said. “That was a really exciting thing for us, I feel like some of the momentum and excitement I got from that is how it must feel to go to a convention like this.”

The retired music teacher said she canvassed during the 2016 and 2018 elections and received an email asking if she
would be interested in applying to be a delegate.

“I think I did this for my children. I wanted to show my daughter in particular that we can all get involved and be a part of the process and this history,” Engstrom said.

Both women expressed frustration with being distant, but Ford said there is also the challenge of navigating uncharted territory.

“Because all of this is so new and it’s a lot of trial and error, a lot of the communication is lacking, or because people are sending you so much information it all gets lost,” she said.

Engstrom agreed, saying it is “hard to have questions answered. I can’t go ask a more experienced delegate from, like, Delaware or from Arizona and get an answer right away.”

But she’s doing her best to make it work, attending online caucuses and meetings and “learning so much from the more experienced delegates and all of the speakers and leaders involved.”

Engstrom also covered a wall in her living room in red, white and blue Biden banners, and made baskets full of DNC goodies for neighbors and family. She plans on attending a watch party Thursday night at a Mesa drive-in movie theater.

“It’ll kind of be a cool social distancing activity for all of the delegates to get to be together,” she said of the drive-in event.

Ford is less excited about the watch parties and is instead reaching out to friends from previous conventions.

“Every four years we look forward to seeing each other, so it is sad that can’t happen this year the way it would otherwise,” Ford said. “I’ve been to so many of these they’re usually like a reunion to me now.”

Both women insist their jobs have not changed, even if the convention has.

Ford said the goal is the same as always, to “come out energized and come out with solidarity.” And despite all the changes to the convention, she said it is still “amazing to see these people who want to be a part of something so amazing and absolutely historical.”

“It’s been exciting to be a part of the excitement and the passion for fighting for the people of this country,” she said. “It’s an all-inclusive thing.”

And she plans to be part of that fight, even if it’s not like previous years.

“My job right now is to vote and represent my district,” she said, “even if it’s from my living room.”