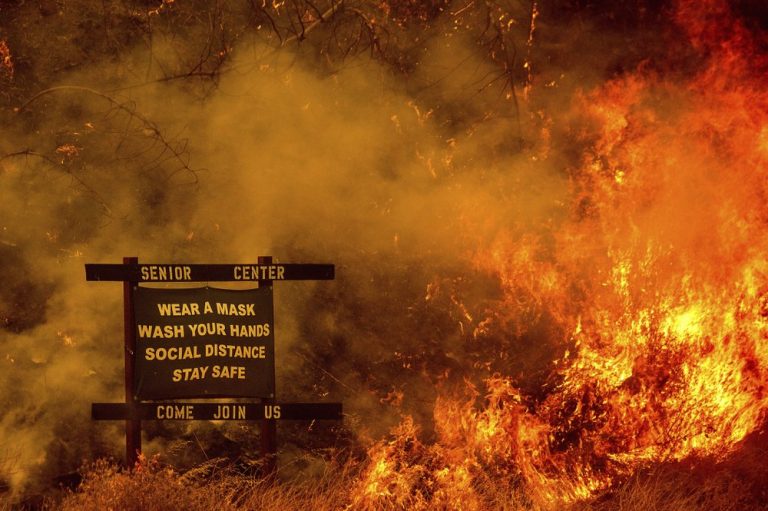 The death of a resident in Solano County, in the northeastern San Francisco Bay Area, was reported Thursday by Sheriff Thomas A. Ferrara, although he didn’t have any additional details.

In addition, three civilians had died in Napa County since the fires began, said Daniel Berlant, a Cal Fire assistant deputy director. In all, more than 30 civilians and firefighters have been injured.

It wasn’t immediately clear whether the Solano and Napa county fatalities included a Pacific Gas & Electric utility worker who was found dead Wednesday in a vehicle in the Vacaville area between San Francisco and Sacramento.

A pilot on a water-dropping mission in central California also died Wednesday when his helicopter crashed.

Gov. Gavin Newsom addressed the wildfires, calling them clear evidence of climate change, in a last-minute video recorded for the Democratic National Convention from a forest near Watsonville after he visited an evacuation center.

“If you are in denial about climate change, come to California,” he said.

“I confess this is not where I expected to be speaking here tonight,” he said into what appeared to be a cellphone camera. Newsom had recorded an earlier, more lighthearted video, to be delivered in the convention’s prime-time hours but decided it didn’t bring the right tone amid his state’s disasters, said Dan Newman, one of his political advisers.

The fires have destroyed 175 structures, including homes, and are threatening 50,000 more, said Daniel Berlant, an assistant deputy director with the state Department of Forestry and Fire Protection. In all, 33 civilians and firefighters have been injured.

At least two people were missing.

Smoke and ash billowing from the fires has fouled the air throughout the scenic central coast and San Francisco.

Most of the activity is in Northern California, where fires have chewed through about 500 square miles (1,250 square kilometers) of brush land, rural areas, canyon country and dense forest surrounding San Francisco.

More than 10,000 firefighters are on the front lines, but fire officials in charge of each of the major fire complexes say they are strapped for resources. Some firefighters were working 72-hour shifts instead of the usual 24 hours. The state has requested 375 engines and crew from other states.

“That’s going to allow our firefighters that have have been on the front line since this weekend to have an opportunity to take some rest,” Berlant said.

“We’re still drastically short for a fire of this size.” he said at an evening news conference.

Fire officials said the flames were being driven by bone-dry timber and brush and erratic winds. They pleaded with residents to be ready to evacuate when ordered because they place firefighters in danger when crews have to protect those staying behind.

“Today we saw a growth of approximately 700 to 1,000 acres an hour in heavy timber,” See said. “That’s a dangerous rate of spread for our firefighters and for all those residents out there.”

Cal Fire spokesman Dan Olson said there are concerns that some people are trying to organize through social media to create volunteer brigades and fight the fire themselves.

“The dangers out there to their own lives outweigh anything they can accomplish,” he said. “They’re putting their lives in jeopardy.”

In Marin County, just north of San Francisco, where a smaller fire is burning near the Pacific Ocean, county fire chief Jason Weber said he is waiting for assistance from Montana to arrive this weekend.

He said in his 25 years in fire service, “we’ve never seen this level of draw-down” from cooperating agencies, as there is heavy competition in the western United States for equipment and people.

In the coastal mountain regions south of San Francisco, where 48,000 people were under orders to evacuate, a fire complex had burned 75 square miles (194 square kilometers). Officials warned it has the potential to grow significantly in the next day.

At least 50 buildings, including homes, had burned and nearly 21,000 structures were threatened, fire officials said.

Given depleted resources, one of the best tools firefighters have for public safety is to get people out of harm’s way. But some people refused when officers went door-to-door Wednesday night, Cal Fire Chief Mark Brunton said.

Kevin Stover, 42, was struggling with indecision early Thursday when a mandatory evacuation order was issued for the rugged and small town of Felton outside the beach city of Santa Cruz.

“I don’t want to leave,” said Stover, a camera operator and rigger now driving for Door Dash and Lyft because of the pandemic. His car, loaded with important papers, his father’s urn and some arrowheads that meant a lot to him, had a flat tire.

“I’m trying to figure out if I should cut these original oil paintings out of the frame to salvage them,” he said.

The unusually large size and number of simultaneous fires, other fires throughout the West and the loss of inmate firefighting crews because inmates were released from prisons to prevent the spread of coronavirus, have created the perfect storm for firefighting.

“Our agency is taxed to the limit,” said Incident Commander Mike Smith at the fire near Santa Cruz. Officials there are awaiting help from other states, but they are having to look further afield than usual, meaning it will take days for crews to arrive, he said. The U.S. Forest Service can’t help because they are busy fighting fires on federal lands.

In Monterey County along the coast, about 9,000 people have been evacuated for a fire that’s now 52 square miles (136 square kilometers).

Two fires in Sonoma County prompted evacuation orders for 8,000 residents near the Russian River Wednesday. Residents of Healdsburg, with a population of about 12,000, were warned Wednesday night to be ready to flee. Fires in that region destroyed more than 100 buildings, including some homes, and threatened 25,000 people across five counties.

Tim Edwards, president of the union representing 7,000 Cal Fire firefighters, said lawmakers need to allocate more money at a time when firefighters are working 40 to 50 days at a time without real relief.

California State Parks announced full or partial closures of more than two dozen parks, including Big Basin Redwoods in the Santa Cruz Mountains, where the park headquarters and other facilities were damaged. The park featuring towering stands of ancient coast redwoods dates to 1902 and is the state’s oldest.

PrevPreviousWhen is it safe to open schools? States have varying answers
NextRepublicans Say Biden Will Face a ‘Steel Curtain’ in PennsylvaniaNext