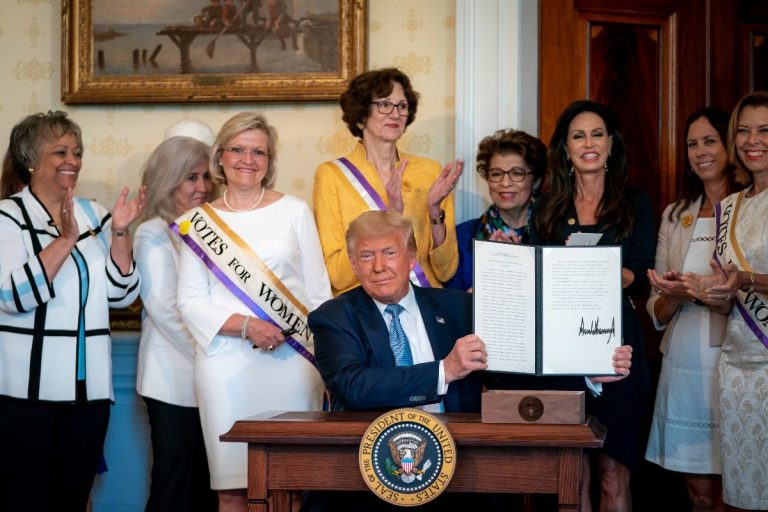 One hundred years ago Tuesday, the 19th Amendment to the U.S. Constitution was ratified, granting American women the right to vote.

The President and First Lady Melania Trump honored the occasion at the White House this morning, where President Trump signed an official Proclamation on the anniversary. It reads, in part:

“Today, as we celebrate a major step forward for our Nation, we pay tribute to the countless women, known and unknown, throughout our history who struggled for equality. In doing so, we recommit to ensuring our Constitution is faithfully upheld so that all Americans can pursue their dreams and fulfill their God-given potential.”

Since that historic day, Americans have continued the work of creating a more just and equal society. President Trump is committed to building on these accomplishments.

Last June, the President and his national security team released a Strategy on Women, Peace, and Security to increase the political participation of women both at home and abroad. This strategy recognizes that women’s participation in resolving conflict and ending violent extremism can set the course toward a more peaceful world.

In December, President Trump signed legislation to provide 12 weeks of paid parental leave for Federal employees. Since his first day in office, he’s called on Congress to pass a nationwide paid family leave program to complement it.

These and other investments in working families are already paying off. Before Coronavirus struck, women’s unemployment in the United States reached its lowest level in 65 years. As of 2019, women filled 71 percent of all new jobs in the United States.

“In other words, women dominate the United States.”

Read the Proclamation: 100th Anniversary of the 19th Amendment