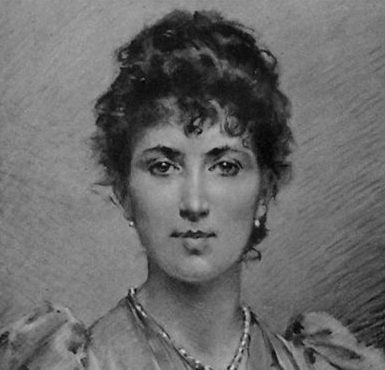 You might think we’re living in a golden age of ice cream innovation.

In plenty of US cities, you don’t have to look hard to find made-for-Instagram flavors like charcoal or Thai tea. Concoctions like liquid nitrogen ice cream blanket the internet.

But Agnes B. Marshall, a 19th-century culinary entrepreneur, probably would have found our ice cream options quaint. Marshall was a chef, cookbook author, and business owner — but she was also an inventor who brought a new level of whimsy to a dessert that, until her arrival, was a treat largely reserved for the upper class.

Marshall mixed spices, meats, custards, and vegetables into her ice creams. Instead of scooping the desert into a bowl, she froze it in fanciful, self-designed casts in the shape of rabbits, melons, and cucumbers.

And although she’s largely forgotten, she might be more responsible than anyone for the look and the popularity of today’s ice cream.

The makings of a culinary disruptor

Born in 1855 in what is now East London, Marshall took an early interest in cooking.

It’s not entirely clear where Marshall learned the ins and outs of fine cuisine, but her husband — a bigwig engineer named Alfred Marshall — later explained to a Chicago newspaper that she “made a thorough study of cookery since she was a child” and that she “practiced at Paris and Vienna under celebrated chefs.” 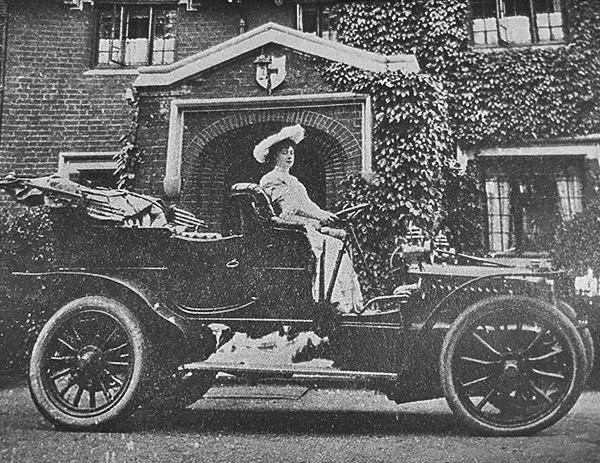 The few accounts of her life lack detail, though we know that when she arrived in London in 1883 and purchased a plot of land on Mortimer Street, she already seemed to be a master chef.

Marshall converted the Mortimer Street property into her own cooking school, which she named Marshall’s School of Cookery. At first, no one in London seemed to know who she was: On her first day in business, not a single soul showed up.

She placed ads in local newspapers, targeting middle-class chefs who wanted to dabble in higher-end cooking. Her classes focused on how to turn dinner party meals into haute cuisine — or “ball suppers, luncheons and dinners.”

Soon, she set her sights on disrupting the ice cream business.

Did someone say savory ice cream?

Little about the ice cream world of the 1800s would be recognizable today. For one thing, only the wealthiest people ate it regularly. (They owned ice houses — a precursor to the freezer — which let them store ice cream overnight.)

That isn’t to say middle-class people couldn’t access the treat. Ice cream peddlers sold the dessert in reusable bowls called “penny lick” glasses. But they couldn’t store it, much less make it themselves, with any ease. 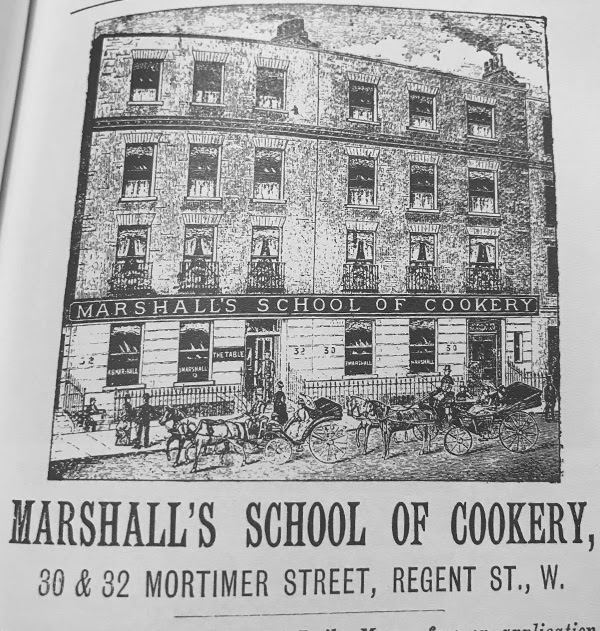 Even more jarring than its limited appeal, though, was the sheer diversity of ice cream flavors on the market. Ice cream chefs didn’t just make chocolate or strawberry — and they definitely didn’t limit themselves only to sweet-tasting flavors.

To understand why this is, you have to rewind back to the early 1700s, when ice cream was first bubbling up in Europe.

At the time, successfully freezing an assortment of ingredients into something like ice cream was so difficult that, as food historian Jeri Quinzio recounted, some of the earliest ice cream recipes didn’t care so much about the flavor. Of utmost importance: Making sure the recipe would actually freeze.

One 1733 recipe, for instance, noted only offhand to “Take Tin Ice-Pots, fill them with any Sort of Cream you like” before shutting them tight.

Victorian-era chefs took that “any sort you like” mandate seriously, experimenting with flavors like rye bread, truffle mushroom, asparagus, and even oyster.

But Marshall brought a new level of culinary entrepreneurship to the ice cream world.

You thought rye-crumbed ice cream was clever? Then try Marshall’s “Foie Gras à la Caneton,” a blend of cayenne, jelly, goose liver, and frozen eggs, all molded into the outline of a duck.

In 1885, when Marshall published her first cookbook, The Book of Ices, only a small set of culinary sophisticados bought it. The reviews were glowing, but they rarely appeared outside of the local press.

So Marshall came up with an idea. Rather than compress her culinary experiments into traditional cookbooks, she would perform them. By 1887, she had laid the groundwork for what she was calling “A Pretty Luncheon” — a tour of England in which she cooked, and tested new recipes, in front of a live audience.

The performances were a huge hit.

Attendees couldn’t get over the care with which Marshall chose her ingredients. A Newcastle newspaper recounted its shock at the ease with which Marshall tried out “the most difficult feats in cooking.” “We looked with a feeling akin to awe at the graceful, kindly lady who is rapidly raising cookery to a fine art,” the paper wrote.

Under Marshall, ice cream wasn’t something to make hastily, but a delicacy that called for precision. But even though her most ambitious, foie-gras-caliber flavors would take out a chunk of your weekly salary, Marshall didn’t just cook for the rich.

One of her great accomplishments was turning the swanky dessert into something a middle class person could create.

Marshall knew it was hard for the average person to make or store ice cream, so she decided to help them. She invented, then patented, one of the earliest home ice cream makers — a circular device that cut the time it took to brew ice cream from 20-40 minutes down to just 3. 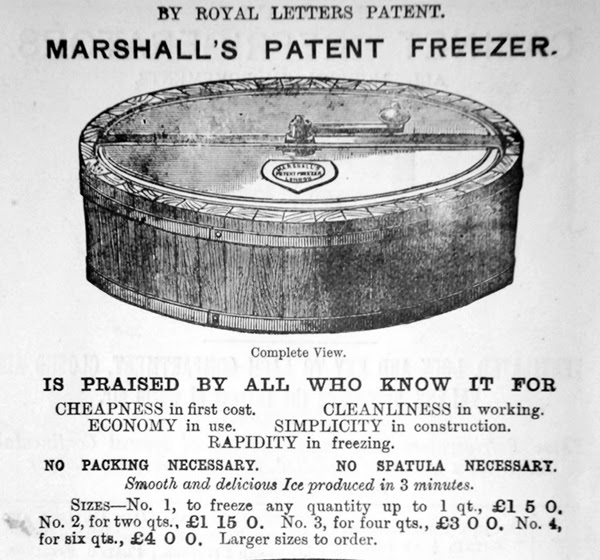 Through her cooking school, she wrote and edited a magazine called The Table.

It was in these pages that Marshall first floated an idea that still seems cutting edge today: Nitrogen ice cream.

Marshall was an ice cream visionary in more ways than one.

Take the ice cream cone: The 1904 World’s Fair, in St. Louis, Missouri, usually gets credit for the site of the first edible ice cream cone. But two decades earlier, Marshall was writing about cooking a precursor to the edible cone that she called “cornets with cream.”

Her recipe called for a wafer-like mix of eggs, flour, sugar, and almonds, and she told her readers to fill them with cream, custard, and fruit.

The wafers didn’t look a lot like the ice cream cones of today. They were baked in delicate stacks, designed to be laid out on a plate rather than to stroll down the block with. Marshall wanted people to eat the ice cream cornets at home, on a plate, with proper utensils.

But her recipe was the first to put edible ice cream cones on the map — and depending on which historian you ask, the first to mention the concept.

Back in 1901, she wrote about a possible technique she called “liquid oxygen” to freeze ice cream at home. Her idea: At a dinner party, guests could make their own ice cream by adding in drops of “liquid oxygen” and “simply stirring with a spoon the ingredients of ice cream.”

Marshall doesn’t seem to have ever tried this. She was extrapolating from contemporary scientific papers about freezing. But over a century later, an offshoot of Marshall’s proposal — nitrogen ice cream — is one of the biggest trends in the dessert world.

Yet for all of her accomplishments, Marshall remains a historical footnote.

After she died in 1905, her husband spun out Marshall’s School of Cookery into a chain of cooking schools and household goods retailers, called Marshall’s Ltd. The company survived until around World War II, then disappeared.

The following decade, a fire ripped through her personal papers, destroying much of the public’s memory of her. Since then, Marshall has faded into obscurity.

But some in the ice cream biz still remember her as a pioneer. A recent St. Louis-based nitro ice cream shop, for instance, named itself “Ices Plain & Fancy” — a nod to Marshall’s book, Fancy Ices.

When you walk into the shop, you can find Marshall’s portrait hanging on the wall. And if you’re hoping to get your 19th-century groove on, you can order “Mrs. Marshall Old-Fashioned Ice Cream” — a mix of vanilla, cider, bitters, and orange peels.

A good mix of flavor? Sure. But if Marshall had a taste, she might have found it a little mundane. 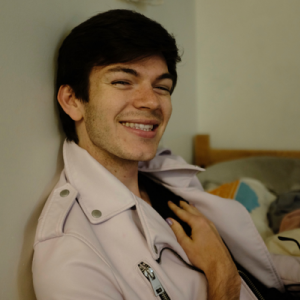