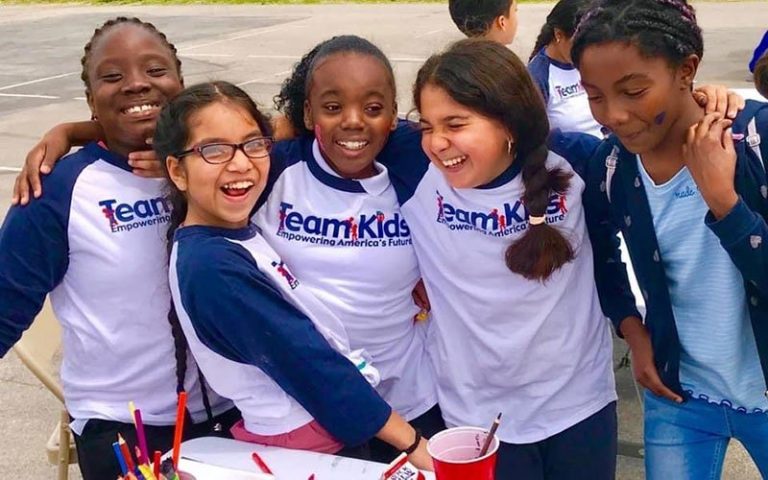 One group of volunteers was concerned about the homeless, so they donated clothes and shoes. Another provided blankets and towels for an animal shelter. And a third gave art supplies to an organization committed to brightening the lives of kids with cancer.

Each group spent five weeks finding a cause they cared about, planning a fundraising event and getting to know each other along the way. The groups were composed of kids at schools in Compton, California, and the police officers and firefighters who serve their communities.

Kids in the city, which has a poverty rate nearly double that of the rest of the country, are used to getting things, according to Jeffrey Harris, director of school and community partnerships at Compton Unified School District.

Donations of backpacks and other items regularly flow into the school. But as they worked on their projects alongside first responders, Harris said he heard a powerful sentiment emerge from the kids: “We’re always getting so much, but now we’re giving.”

As police and protesters clashed across the country this summer following the death of George Floyd, Adam Fine, a developmental psychologist focused on juvenile justice at Arizona State University’s School of Criminology and Criminal Justice, studied these kids from Compton to glean new insights about children’s perception of police.

Fine’s study, published in June, had a few major conclusions: Racial differences in the perceptions of police legitimacy begin in childhood, and these perceptions may be improved by programs that allow police and children to interact in non-confrontational settings.

He and his colleagues surveyed more than 1,000 school children and found that at the age of 7, kids had relatively high perceptions of police legitimacy. But by 14, they had declined – much more so for Black and Latino children, than for white children. Compton is 98% Black or Hispanic, and Fine’s findings match Harris’ personal experience with the kids in his school district.

“It’s triggering for some young people just to see an officer in their uniform,” Harris said.

Fine’s group also studied students between fourth and seventh grade at two Compton schools that participated in the police-assisted service project. The children answered surveys given before and after they put on fundraiser carnivals and presented checks to the charities of their choice. Fine’s team found that the program significantly improved the kids’ perceptions of police legitimacy.

Perception of the police has been a focus of Fine’s research for years. It’s important, he said, because there is ample evidence that shows these perceptions are correlated with criminal activity. The idea is, the more a community trusts and respects its police force, the safer the community will be.

“What we know across the country is that police departments do not represent the communities that they serve: racially, ethnically, gender disparities,” Fine said.

Additionally, he pointed out that police departments across the country are having a hard time recruiting. Perhaps, he hypothesizes, community perceptions of the police could be connected to these issues.

About 170,000 kids have gone through the program at the center of Fine’s study, the Team Kids Challenge. Founded in 2001, Team Kids is a nonprofit organization that delivers the flagship Team Kids Challenge in four states, including two in Tempe. School participation is growing.

This, Fine said, contrasts sharply with the country’s most famous police-in-schools program: D.A.R.E., or Drug Abuse Resistance Education. Despite a number of studies showing its lackluster – or sometimes counterproductive – impact on kids’ drug use, the program has spread rapidly, reaching 52 countries and 75% of the schools in the U.S. – 200 million kids have gone through it, according to Encyclopedia Britannica.

D.A.R.E. has cops deliver a one-way message: As Harris put it, “Do drugs, and you’re gonna deal with me.”

“(Team Kids) is completely the opposite of that,” he said. “The authority figures are coming in in their uniforms and literally saying to the kids, ‘We want to help you … you’re trying to do something good. And you tell us how we can support you and work with you to do this.’”

Some of Fine’s colleagues are studying the impact Team Kids has on the police officers as well.

“You’re bridging the gap between teachers and students and families and community and first responders,” one officer told them. “And you’re making it all one mission to help something else.”

He clarifies that programs such as Team Kids Challenge, dedicated to improving public perception of police, are most effective after the police address the roots of these perception issues.

“This distrust of the police doesn’t come from thin air,” Fine said. “To me, step one is actually that police departments need to enhance tactics … the police behavior itself needs to change.”

Harris agreed, acknowledging that recent events have further challenged the relationship between people and police.

“Whatever positive feelings there were about law enforcement in general – at least within our community – they’re just gone,” Harris said. “Now, the fear, the anger, I think is at an all-time high.”

Programs such as Team Kids, Harris said, are “part of the solution, it’s a start. And you gotta start somewhere.”

His hope is that as a result of kids and cops working together to do good for the community, police may start to see the kids differently.

“If you can see a 10-year-old as the sweet precious person that he or she is, if they’re Black or brown or low-income or whatever community they’re in, maybe you can see that in a 12-year-old and a 16-year-old,” Harris said.

Maybe, he hopes, “instead of (a police officer) approaching the 16-year-old as a possible suspect,” they’ll think to themselves, “Oh, that looks like that kid that I worked with in Team Kids.”

Fine said he is encouraged by the national conversation on policing, but he recognizes it needs to result in effective action.

This story was produced in collaboration with the Walter Cronkite School-based Carnegie-Knight News21 “Kids Imprisoned” national reporting project scheduled for publication in August. Check out the project’s blog here.