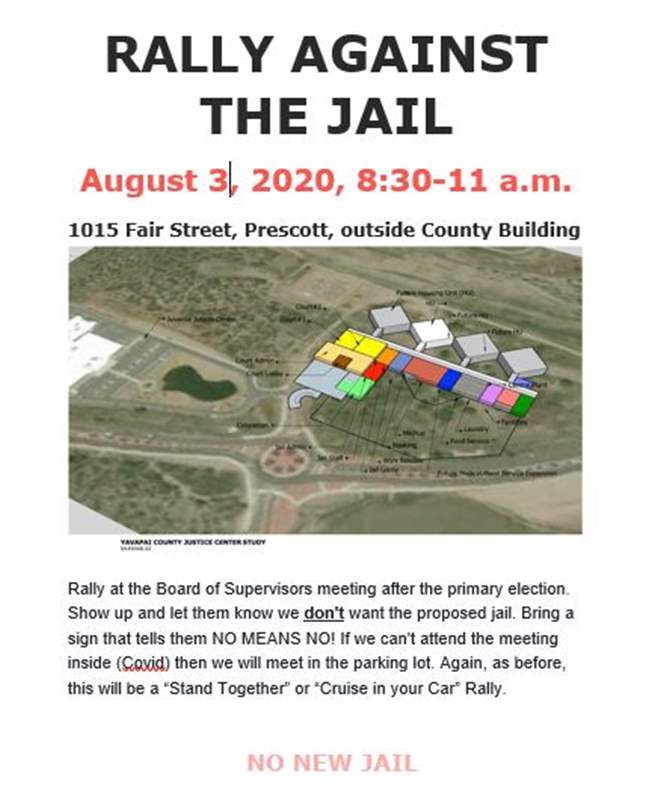 Opposition to a new county jail in Prescott is now organized and growing.  A coalition of concerned citizens  has scheduled a  Rally Against the Jail,  Monday,  August 3rd,  outside the County  Building, 1015 Fair Street, from 8:30 to 11:00am. The Rally was originally scheduled to coincide with a Special Meeting on the jail set by the Board of Supervisors  for  Wednesday,  August 5th.  But when the Board abruptly  changed their meeting date,  the Rally was rescheduled to coincide with the date and time of the new meeting. The Board  has stated they will discuss the jail proposal but has not released details.

The County Building has been closed to the  public due to COVID 19,  and the public will not be allowed to attend the meeting.  The Rally will be held outside in the front parking lot.

Pam Pearsall, an organizer and leader of Stop the Jail, states that the community was caught off guard when County Supervisors approved construction of a new jail and raised property taxes 18% without significant input from the public.  Previous efforts to raise funds for a new jail were  submitted to the voters but  turned down. This time the Board of Supervisors has used their authority to raise property taxes without submitting the matter to the voters.

The issue of whether or not the county needs a new jail has roiled county politics for years. In 2008 and again in 2014, voters turned down a sales tax increase to fund a new jail, most recently by a  substantial margin with 58% of voters opposed. 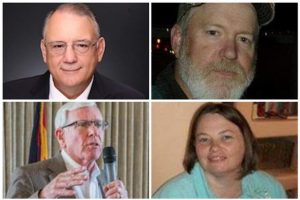 Candidates for County Supervisor and County Attorney have  now weighed in with opposition.  In an open letter to the County Board of Supervisors signed by candidates Harry Oberg  (District 1),  Steve Irwin (District 5),  Wiley Cline (District 2) and Jane Anderson (District  4),  they  have demanded a halt to jail plans until new members of the Board are  selected and take office in January.  They argue that building a jail near residential areas of Prescott is irresponsible  and will hurt property values.  They also argue that  the county needs to explore more alternatives to incarceration that will lower a county incarceration rate that is currently  well above the state average.

Stringer led the 2014  campaign against the Jail District Sales Tax and has been a proponent of alternatives to incarceration for low level, non-violent offenders that include expanded treatment and diversion opportunities. “Jailing people is expensive and socially destructive”,  Stringer states.  “And for low level offenders, often unnecessary. Overzealous  prosecution of low level offenders is crowding the jail and driving up the cost of  government.”  He says this year’s county election is  “becoming a referendum on the  jail”.

A copy of the announcement for the Stop the Jail Rally and the full text of the candidates’ letters are reproduced below. 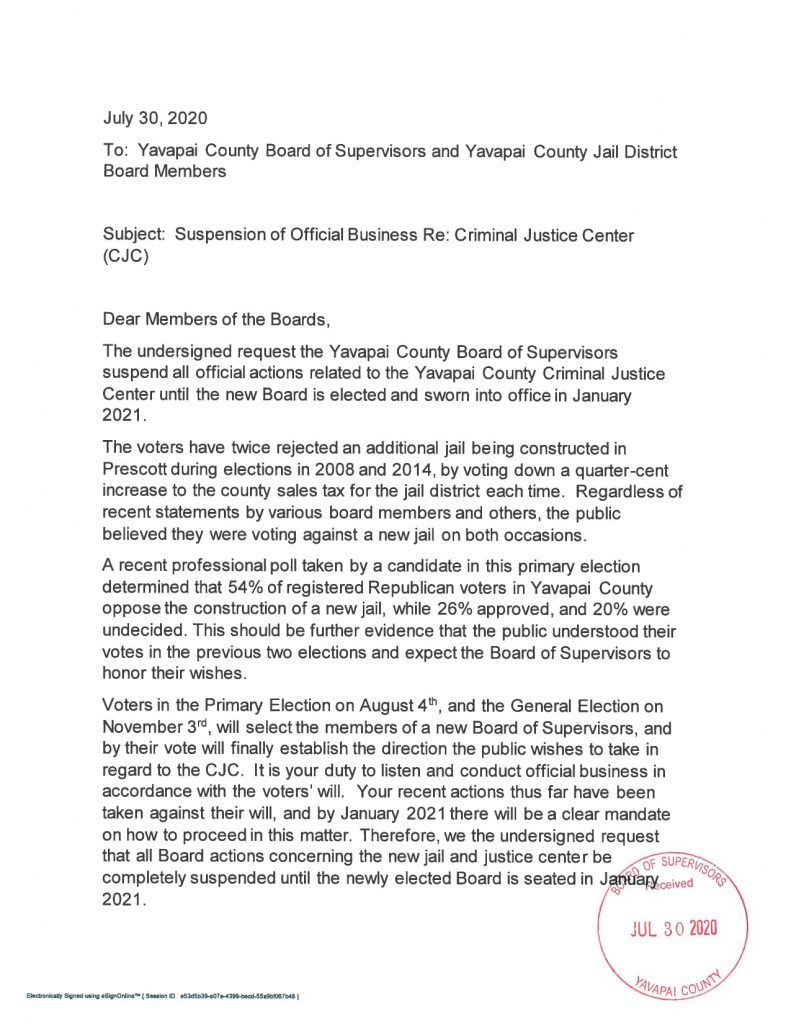 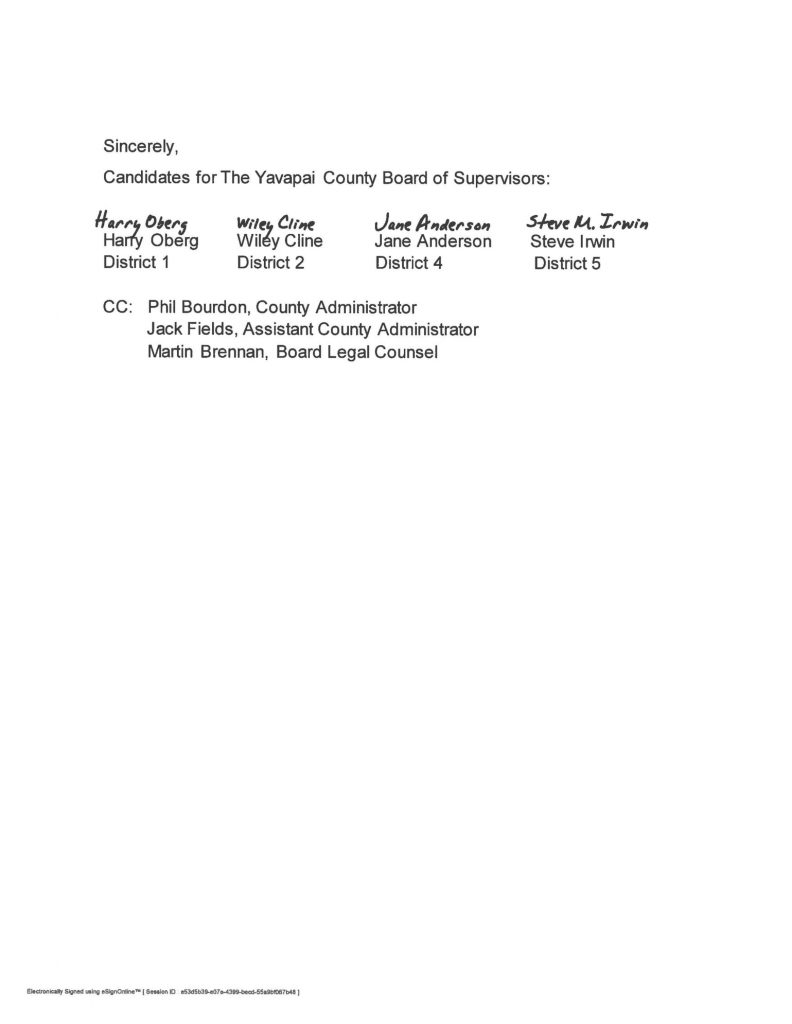 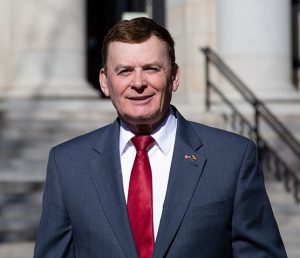 FROM THE DESK OF DAVID STRINGER

Yavapai County Board of Supervisors

RE:  SUSPENSION OF THE  PRESCOTT JAIL PROJECT

I am writing in support of the demand by current Board of Supervisor candidates that all planning and fiscal commitments associated with the construction of a new county jail in Prescott be suspended until such time as new members of a reconstituted Board of Supervisors can be seated.

The  proposal to build a new jail in Prescott has been turned down twice by county voters by substantial margins,  the second time as recently as 2014.  Given the current economic uncertainty facing the residents of Yavapai County as a result of COVID-19,  this is the wrong time for the county government to take on more debt and raise taxes on county property owners for a jail that is widely opposed.

Further, the proposed location of the new jail on Prescott Lakes Parkway is within walking distance of residential areas of the city and is the wrong place for a jail. The unsightly nature of the brick and barbed wire structure and the security risks associated with a correctional facility is an unwarranted imposition on local homeowners and is likely to have a negative effect on property values.

The residents of Yavapai County are currently debating thru an election the wisdom and necessity of building a new jail.  The 2020 Election in Yavapai County has become a referendum on the jail.  Yavapai County has an incarceration rate above the state average.  Candidates for the Board of Supervisors and County Attorney have proposed expanding diversion and treatment options that will reduce the need for higher levels of incarceration.  These programs have proven successful elsewhere and hold great promise for reducing the cost of Yavapai County’s criminal justice system.

Charging policies by the current Yavapai County Attorney’s office have filled the county jail with many low level, non-violent offenders.  For example, possession of marijuana has been prosecuted more aggressively in Yavapai County than elsewhere in the state.

In November Arizona voters will decide on a proposal which has passed in neighboring states, to decriminalize the possession of marijuana for personal use.   Regardless of one’s views on the merits of the proposal, if the ballot initiative is successful, as widely predicted, it will further reduce the need for additional space in our county jail.

For all of these reasons, there is good reason to expect that additional jail beds in Yavapai county will not be needed in the foreseeable future.  There is ample time to reconsider the best location for a new jail facility when we can afford it and when it is actually needed.

As a candidate for Yavapai County Attorney, I strongly urge the Board of Supervisors to defer further action on the construction of a new jail in Prescott until the will of the voters is known and other options can be fully explored.

PrevPreviousNavajo ‘Water Warrior’ drives miles during COVID to deliver to those in need
NextOn their way north, pregnant migrants brave a harrowing jungle crossing in PanamaNext

5 thoughts on “Jail Opponents to Rally”