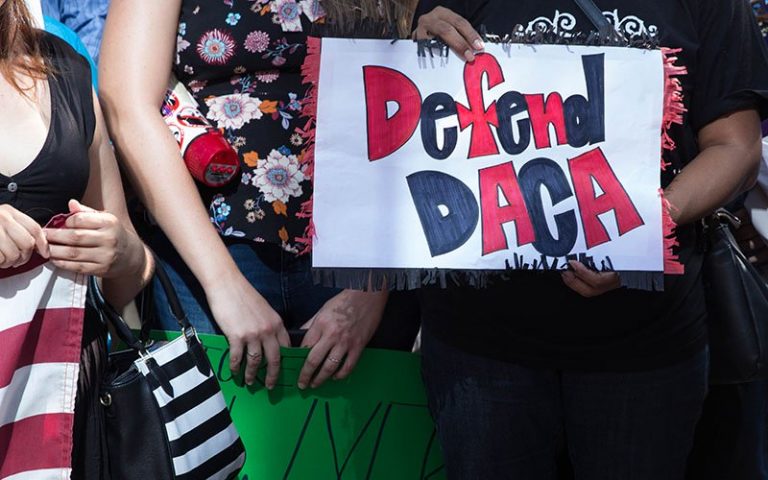 The federal government is currently not accepting new applications for protection under the Deferred Action for Childhood Arrivals program, despite a federal court’s order Friday that it resume doing so.

A U.S. Citizenship and Immigration Services spokesperson said Monday that “Department of Homeland Security and the Department of Justice are reviewing the court decision, and USCIS has no further comment at this time.”

The order Friday by U.S. District Court Judge Paul Grimm in Maryland came almost a month after the Supreme Court overturned the Trump administration’s plan to eliminate DACA. The Obama-era program deferred deportation for undocumented immigrants who were brought to this country as children, and granted them work, driving and other privileges.

The high court’s ruling involved a different set of challenges to the administration plan than the one Grimm ruled on. But he referenced the Supreme Court when he vacated the administration’s move to get rid of DACA and ordered the policy restored to its status “pre-September 5, 2017” – the day then-Attorney General Jeff Sessions announced that DACA would be phased out.

But immigration attorneys said Monday that hasn’t happened – yet.

USCIS, the agency that processes DACA applications, said on its website that it is only accepting DACA renewals, not new applications. And it has not laid out the process for taking new applications should it decide – or be forced – to do so.

Legal experts said the reach of Grimm’s order could be challenged. While the agency may eventually be forced to take new applications, immigration attorneys are warning that DACA recipients, often referred to as “Dreamers,” should not get too comfortable.

“I do think there’s a strong argument that USCIS should nonetheless accept this across the country, as a directive to no longer enforce the rescission order,” said Ray Ybarra Maldonado, an immigration attorney in Phoenix. “And if someone’s eligible, to get it in as fast as they can before Trump again moves to cancel.”

While that led to fears that President Donald Trump would simply start over in his push to do away with the program, he has been coy about his plans.

During a Rose Garden briefing last week, he told reporters he would “take care” of DACA and look to sign a “very big merit-based immigration action” soon. A week earlier, he said in an interview with Telemundo that he was looking toward an order promising a “road to citizenship” for DACA recipients – a softer stance than what he usually takes when talking about the program.

But Ybarra Maldonaldo notes that the president could change his position with a tweet.

“Trump can end the program at any moment and he’s already stated his intention to do so,” he said.

Ayensa Millan, an immigration attorney with CIMA Law Group in Phoenix, said USCIS is under obligation to accept Grimm’s order, unless another court issues a ruling or interpretation that would conflict with the Maryland one.

“If a different court says, ‘No, no, no that’s not what USCIS is supposed to do’ – then it’s just going to hold the entire process all over again,” Millan said.

Millan also noted that USCIS has still yet to provide any guidance on how it will go about processing new applications if it chooses to accept them.

The Justice Department declined to comment on Grimm’s ruling.