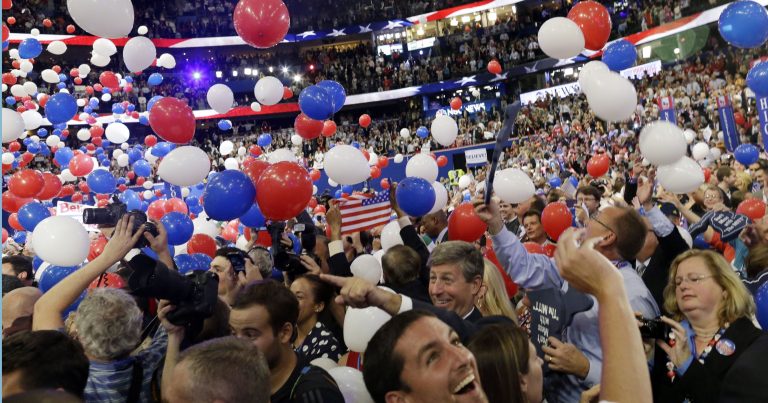 They’re getting ready to blow up the balloons for next month’s Democratic and Republican national conventions. Ah, the balloons! The classic grand finale drop symbolizes the end of these quadrennial gatherings, much the way the Times Square ball drop is an essential part of New Year’s Eve.

And that, critics point out, is what’s wrong with modern political conventions. (Although as a former network journalist, I can attest TV loves that part most of all.) Sure, the balloons are pretty and fun; but in a larger sense, opponents say, they signify the worst of the four-day event: It’s entertainment over substance.

Drop the show biz razzmatazz instead of the balloons, they argue. Replace all the songs and warm-and-fuzzy videos with the fact-based information that voters need in order to make informed decisions on Election Day.

Yet that’s the very approach that made public television the broadcast powerhouse it is today. Have you checked C-Span’s standings in the ratings lately? Well-intentioned as it is, the idea is dead on arrival. With more entertainment options and less free time available than ever before, the last thing most hardworking Americans want is to spend two weeks every four summers watching a parade of politicians bloviating in prime time.

But the premise is flawed at a much deeper level. Because proponents for more substantive events completely miss the point. A modern political convention isn’t about the folks watching at home. It’s a party for the party itself. And under the gala exterior, a lot of important activity goes on that’s never caught by TV cameras.

Admittedly, the 19th-century reasons for why conventions were created no longer exist. The primary process has turned delegates into mere functionaries whose key duty is making the presidential and vice-presidential nominations official. The party platform, a declaration stating each party’s stand on important issues, has been irrelevant ever since Bill Clinton simply disregarded the Democrats’ edition in 1992. The wimpy, generic drivel that replaced it now reads more like one of Stuart Smalley’s “Daily Affirmations” than a political manifesto.

So, why bother holding political conventions at all?

Because the real work done there isn’t conducted on the convention floor. It takes place over tables in restaurants, in the corners of hospitality suites, and at hotel bars. The delegates and alternates who meet during those four days are politicians, after all. And they gather to do much more than ratify the results that primary voters decided months earlier in picking the presidential nominee.

These often causal get-togethers are where ideas are exchanged, where information about new ways to reach and affect voters is passed along, and were knowledge is transferred. They’re where alliances are formed, not just at the national level but often also for gubernatorial and congressional contests as well. They’re where contacts are made that can lead to new fundraising resources, emerging political talent is discovered, and yes, where deals are even sometimes struck. They are, in short, where the nuts and bolts yeoman work of a political organization is conducted.

More than anything else, a political convention provides a vitally important opportunity for providing that vanishing quality: one-on-one human contact. Sure, most of the things I just described can be conducted via email, text messaging and phone-calls. But they don’t allow you to look into the other person’s eyes and gauge the sincerity (or lack of it) behind their words. Lyndon Johnson once said of political conversations: “The most important thing is what the other person is trying not to tell you.” Political types speak a language all their own, where volumes are said through a simple nod, a wink, a knowing smile. You don’t get that via any electronic communications medium.

Finally, the two-party system is responsible for much of America’s stability and success over the past two centuries. And the convention is a key ingredient in keeping a political party strong. Delegates return home energized, enthused and eager to campaign for — and against — their favorite candidates and causes. Robust political organizations not only make for better political campaigns, they strengthen our republic itself as well.

So please, forget the idea of transforming political conventions into venues for producing better educated voters. That would be a fool’s errand. Better to use all that hot air to blow up all those balloons instead. And yeah, keep the balloons, too.

J. Mark Powell is vice president of communications at Ivory Tusk Consulting and author of the political thriller “Tell It Like Tupper.” He wrote this for InsideSources.com.
All Posts »