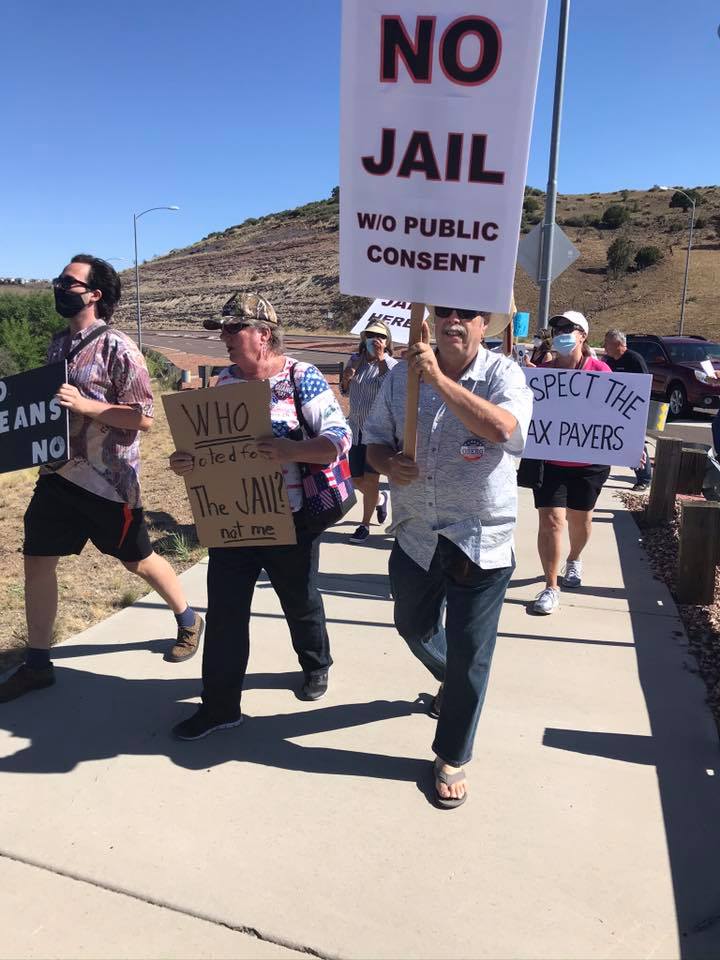 A rally against the proposal to build a new 144 bed jail and judicial complex in Prescott drew upwards of 60 opponents Friday morning to the proposed site on Prescott Lakes Parkway. The County Board of Supervisors originally scheduled July 17th as the ceremonial ground breaking for the new jail, but cancelled the event at the last minute.

Opponents of the jail nevertheless went forward with their planned protest, which proved to be a peaceful and orderly affair.  With citizen activists, the rally drew candidates from across the political spectrum who have made opposition to a new jail in Prescott a centerpiece of their campaigns. County Board of Supervisor Candidates Harry Oberg, Steve Irwin, and John Lutes were present either in person or thru campaign representatives along with County Attorney candidate David Stringer.

Former County Assessor Pam Pearsall  and local activist Mary Beth Hrin spoke to the assembled group. Hrin,  a former police officer and prosecutor, argued that the county overuses the current 644 bed jail in the Verde Valley by failing to utilize alternatives to incarceration that have been proven effective elsewhere. “When you only have a hammer, everything looks like a nail.”

The rally drew activists from across the political spectrum.  Conservatives such as Oberg, Irwin and Stringer are opposed on fiscal grounds, arguing that a new jail is not needed at this time and this is the wrong time for the county to raise taxes and take on millions of dollars of new debt. John Lutes, a Democrat running for Supervisory District 1, emphasizes that the county over-incarcerates and is diverting funds from schools. Demonstrators chanted “Education, not incarceration”. 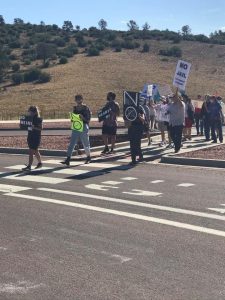 After hearing from speakers, jail opponents formed a caravan and drove to the Yavapai County Courthouse in downtown Prescott where they circled the courthouse square with Stop the Jail signs and flags waving.

Although the question of whether or not to build a new jail in Prescott is not on the ballot this year, it is becoming a central issue in the election. Many homeowners are just waking up to the realization that the County Board of Supervisors raised property taxes 18% to fund a new jail, without submitting the matter for voter approval. The proposal to build a new jail in Prescott has been floating around for years, but the tax increase needed to fund it has been voted down twice. The most recent proposal in 2014 was defeated 58% to 42%.

County Supervisors and jail proponents argue that the Verde Valley jail is overcrowded and too far away from the Yavapai County courthouse in downtown Prescott. They cite high transportation costs.

Opponents counter that the County Attorney’s Office manipulates the jail population by overcharging low level, non-violent offenders and has a long history of opposing alternatives to incarceration that are widely used in other jurisdictions. They point out that Yavapai County is the size of New Jersey. There is no way to completely eliminate transportation costs. Currently, transportation costs are said to be close to two million dollars a  year. Opponents point out that even if a new jail cut that figure in half, it would take 70 to 80 years in transportation savings for the jail to pay for itself.

The actual price tag of the proposed jail is unclear. The advertised price is 68 million dollars for 144 beds and associated infrastructure. That works out to $472,000 per jail bed. But opponents of the jail point out that the county has sold a 65 million dollar jail bond that amortizes at 4.3 million dollars a year over 20 years. That amounts to 86 million dollars or $597,000 per bed. Stringer likes to point out, “The average construction cost of a Hyatt hotel room is around $100,000. You could build a nice house in Prescott and throw in a new car for what the County Board of Supervisors wants to spend on a jail bed. Something is wrong there.”

In an open letter to voters, County Supervisor Craig Brown, (District 2)  says it is too late to stop the jail without significant financial penalties. The Board of Supervisors is forging ahead without voter approval. However,  several County Supervisor candidates, including Harry Oberg, Steve Irwin, Wiley Cline, and John Lutes say they will try to find a way to stop it. County Attorney candidate David Stringer predicts the jail will never be built. “With a new County Attorney, we won’t need it. And the voters won’t stand for it.”

The three candidates for the Board of Supervisors have just released the following announcement: 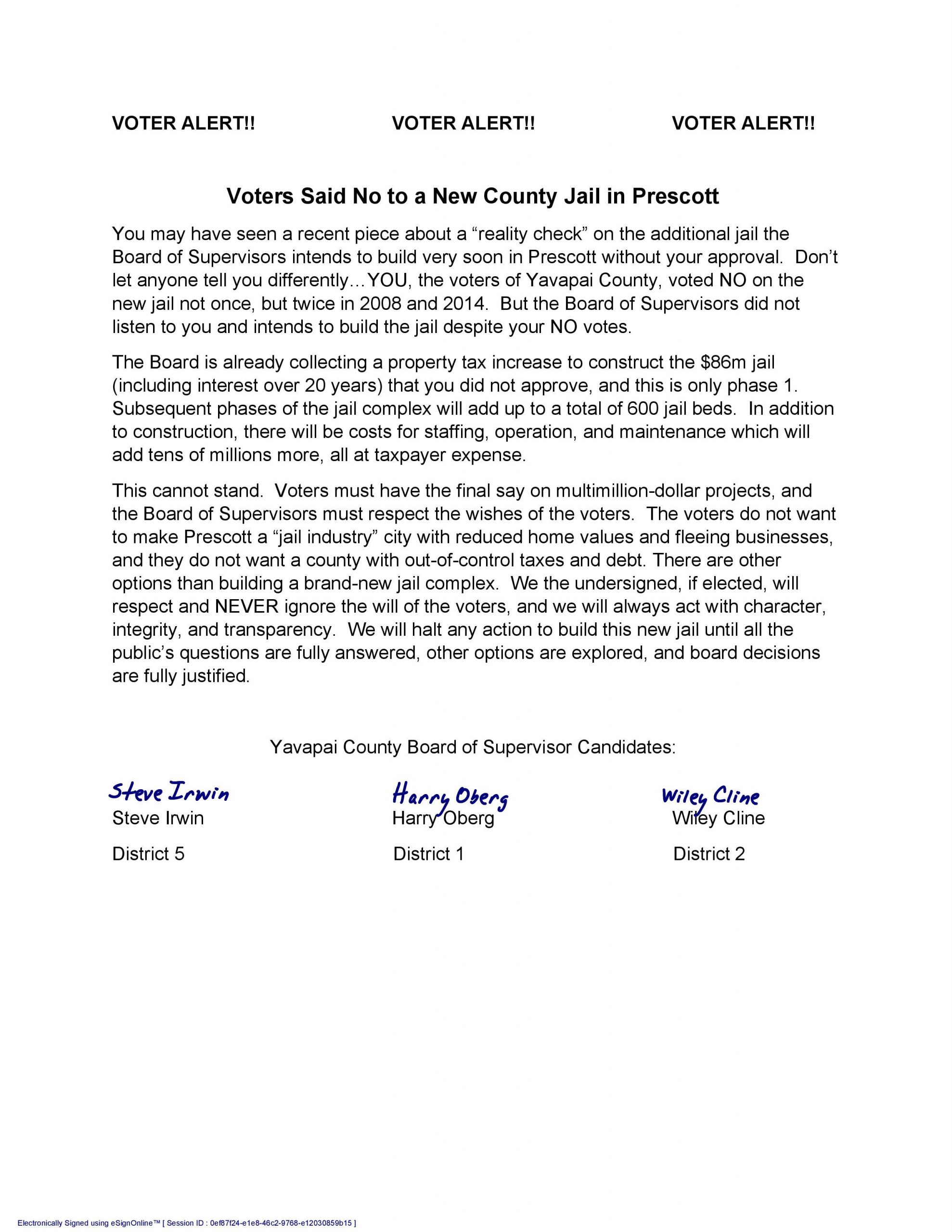