Costs and Questions Leave Voters Opposed to an Additional Jail 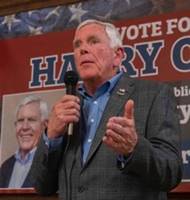 The most important issue facing Yavapai County property owners in the August 4th primary election is not on the ballot.  Or is it?  The County Board of Supervisors, with little public discussion, hit taxpayers with an 18% increase in their primary property tax last Summer to fund a new $86M jail complex on Prescott Lakes Parkway.  This jail and tax increase is not explicitly on the ballot because the Board of Supervisors was able to use their authority to raise property taxes without voter approval.  But several BOS candidates, including me, are raising critical questions about: (1) the need for a new jail itself, (2) whether the proposed location is the right one, and (3) the wisdom of raising taxes and taking on additional debt in a time of great economic uncertainty.  However, voters do have a chance to express their views on the jail and property tax increase by voting for BOS candidates who are against proceeding with an additional jail complex.

Many unanswered questions leave voters opposed to this additional jail on firm ground:

Secondly, exactly why is the County pursing a 600-bed jail complex in the middle of residential neighborhoods?  Has the Board considered the unintended consequences from a facility of this magnitude on the quality of life in these communities and on tourism in downtown Prescott?

Finally, is now the right time to saddle the taxpayer with an $86M debt for an additional jail — and a mental health facility?  (That is also part of this proposed jail complex.)  However, no costs for the construction and operation of the mental health facility are currently available to the public.

My answer to the above question is an emphatic no.  Our nation is suffering a significant economic downturn due to the Wuhan virus.  Yavapai County is no exception.  The County Board of Supervisors publicly stated it is unable to project the loss of county revenue over the next 2-3 years as a result of the virus lockdown.  Asking taxpayers to take on significant debt for an additional jail at a time when county residents are hurting financially and small businesses are struggling to remain solvent is not a wise decision.

My proposal is this: Suspend the collection of the recently imposed 18% primary property tax increase for the additional jail and public safety pensions at this time.  The suspension of the 18% tax increase would give the Board of Supervisors the opportunity to reassess its overall decisions about the additional jail as well as to understand the full extent of the economic fallout from the Wuhan virus.

I have another suggestion/question: Why isn’t there an independent jail district board?  The current Board of Supervisors serves in both roles.  This clearly interferes with producing independent ideas, conducting proper oversight, and allowing transparent decision-making.

Transparency in government decision-making is paramount.  Until the Board sufficiently answers all these questions for the public, no work should proceed on the proposed jail complex and mental health facility.

Candidate for Yavapai Board of Supervisors, District 1.
All Posts »